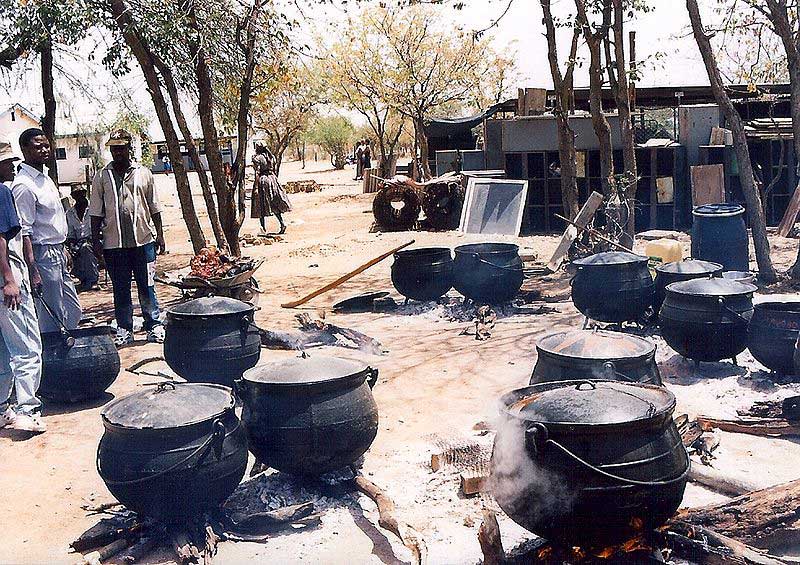 Many traditional South African dishes include pap, such as the smooth maize meal porridge called slap pap, or alternatively this very thick consistency pap, that can be held in the hand. This being the drier, ‘stywe pap’ or crumbly putu (pronounced as in Desmond Tutu) pap, granules about the size of soya beans as in the image below. It is the women who traditionally make or cook with mielie meal, as opposed to the men who help stir the pots and pound the beef at big celebrations. Woman also make the traditional African maize beer, both the alcoholic and non-alcoholic versions. The men are not taught or expected to make the maize beer, which is culturally the women’s job. Traditionally made with white maize, although today it is often made with yellow maize. Many South Africans have a long-time tradition of having a – ‘braaivleis n’ mieliepap’, – or – ‘braaivleis n’ stywe pap’, – meal. Today that has been shortened to – ‘braai n’ pap’ or ‘pap n’ vleis’ – meaning to grill or barbeque the meat to eat with pap. Probably the most popular braai is ‘boerewors n’ pap’, (spiced beef 75% and pork 25% sausages) because of the flavour, the ease of eating and of cooking and both braai rituals are done as common week-end entertainment, by all South Africans everywhere. This ritual usually calls for the addition of ‘smoor’ – a gravy type of relishy, spicy sauce.

Some ‘smoor’ recipes have been fancified out-of-sight but many think the best and most African, is a simple stew of onions and tomatoes, cooked slowly ‘til a soupy mush is achieved – spiced to your liking.

African cooking manner – in a frying pan over medium heat

one small can of tomato paste

Heat oil in pan. Fry onions until soft and slightly golden. Add garlic, if using. Stir in tomatoes and paste, mashing down on the tomatoes gently. Add water to make a smooth sauce. Stir and season to taste. Bring to a slow boil, reduce heat, simmer for ten minutes. Adjust seasoning – you want a piquant, slightly sweet-n’-sour flavour here. Cook for another 5 minutes and serve with your mieliepap. Seriously Yummy!