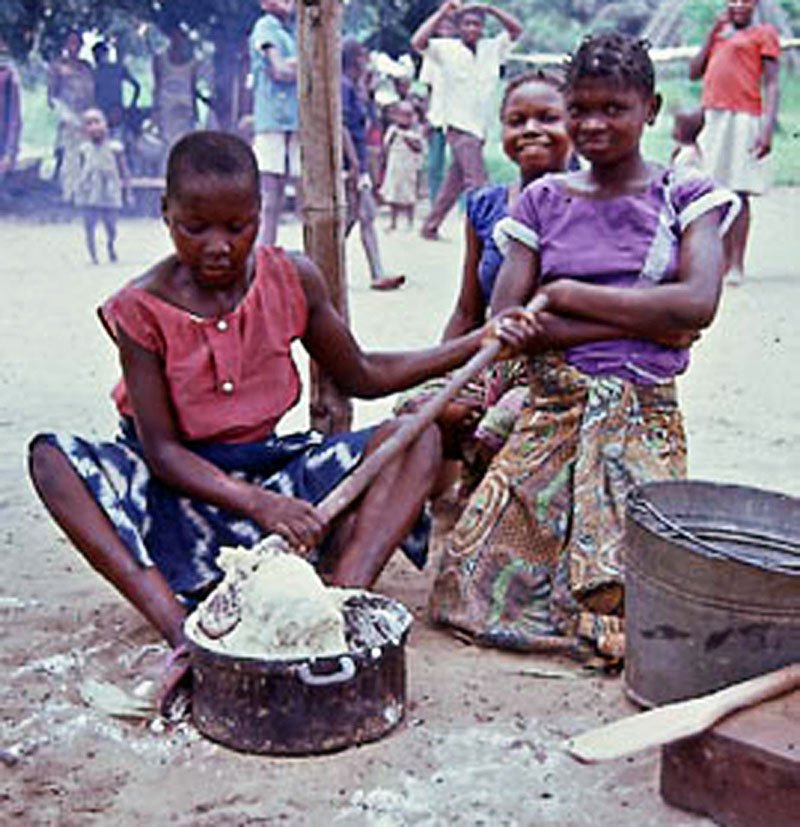 Mielie-meal ‘pap’, mieliepap, putu pap or stywe pap, has formed the basis of African cooking and eating for centuries. Mielie-meal (from the Portuguese word “milho”) porridge is eaten all over Africa. It’s a staple in the truest sense of the word and every African cuisine that favors maize meal over cassava, has its own version – all remarkably similar types of porridge or *mush-like* mieliepap (similar to polenta).

There are African shops in most cities around the world; for a price they provide homesick Africans with a taste of the familiar. Order online, from shops like Kalahari Moon, The Bok and Rose, The Safa Shop, Susmans or Taste of South Africa.  You will be wanting Iwisa or Impala mielie meal and unless you’re cooking for the whole soccer club, a one kilogram bag should be plenty. Otherwise, white polenta or white cornmeal will work if there are no other options available. Yellow maize corn meal will also work at a pinch.

This Pap recipe is for mieliepap, putu pap, stywe pap (stiff porridge) that can be taken by hand hot or cold and formed into easy to handle sausage shapes, to be dipped into the stew or sauce (using your fingers).

Stywe Pap (mieliepap): (pronounced Stay-va P’ha’p, like one ha, ha with two p’s or the southerners Ma and Pa, with a p at the end of Pa) or use the African name putu pap!

½ teaspoon salt (or to taste)

In a pot with a heavy base and tight-fitting lid, place the water (and salt) and bring it to the boil. Slowly pour in the mielie-meal, stirring steadily and dissolving any lumps. (a helper is useful here – especially the first time)

Cook this thickened mixture 3-4 minutes, still stirring constantly. Do not stop stirring as it becomes very thick. It should form a softish, gloopy white mass hard to stir. At this point turn the heat down as low as you can, add a few pats of real butter to the top of the pap, close the lid tightly and leave to cook (very low heat, for gas use a Cooking Heat Diffuser) for fifteen or twenty minutes. Slow cooking mieliepap is definitely the secret. Voila, you now have mieliepap.

The idea here is to let the Pap steam gently – the bottom will develop a thick, brown crust.  As a child, the crust was the best part, unless we burnt it! Yech! Best then to throw all carbonized (black) bits out… bitter, bitter, bad!

Serve with a stew or soup, cooked vegetables, or with a gravy. Mieliepap is very filling, so be careful with portions.

Mashed root vegetables (cassava, sweet potato, yams) can be used to make similar porridge-like dishes (fufu) by boiling these starchy root vegetables in water and pounding until a smooth thick paste is formed… Both maize and cassava, from the Americas, would have been brought to Africa by early European and Arab traders, about the 1500’s.

My people started arriving about the same time! What the staples were before that?  Wouldn’t I love to know for sure! Although the word on the street says it was types of Millet and Sorghum; both grains originate here in Africa and are important staple foods for millions of rural poor, for centuries now, so I’ll have to believe them, this time.