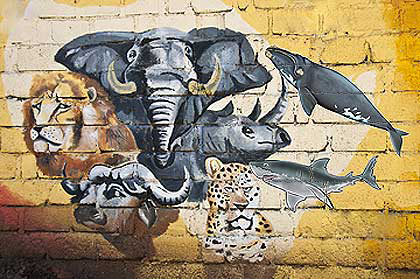 Rangers of the south

Have you heard? We in South Africa, should host the ‘Big Seven’ by including the Great White Shark and the Southern Right Whale. If you have, don’t read any more. James Stevenson-Hamilton would have fallen of his horse, if you told him that he would be looking after a fish and a whale as part of his job. And on horseback – nogal?

So it goes something like this. “Are they in the Kruger National Park?” “Well no! But they are within our borders! Well, sometimes that is. We are just nice guys looking after the world’s fisheries.”

I have no problem with whales and sharks. In fact, I like them both for different reasons. But to include them in with the Big Five land mammals makes no sense. Rather have the Big Five of the oceans – what do you think of that? But now we have the Big Five land animals and the big two sea animals, all thrown into one. Although one is not a mammal but a fish… Is this all making sense to you?

If you visit South Africa and you haven’t had an interaction with the Big Seven then you haven’t seen what matters, (according to the South African tourist board). Not like in days of old where the big five were the ultimate experience for a tourist. Some things are sacrosanct and best left alone because they work. If it ain’t broke, don’t fix it.

So where can you see these Big Seven, you may ask? In a reserve of course! But where? Well that’s a trick question. Apparently, some say, because the Kruger now goes into Mozambique all the way to the ocean, you can see them all at the sea, which is now part of the Kruger – not true. I challenge you to find out what part of the Kruger is part of the ocean and then, when you do, see who’ll show you the whale and the shark – and you won’t need your 4×4.

Now here is a problem, the southern right whale does not feature in the upper warm Mozambique current – no food. And if you can see them both, you have made history, but you won’t be in South Africa anymore.

I would say that our largest, best known and oldest national park does not have the Big Seven, so why go there? I could wax lyrical and say ignore over 90% of our wildlife reserves. Now that’s “nuts” – as Gen. Anthony ‘Tony’ McAuliffe once wrote to the German High Command in 1944 WW II, when asked to surrender!

We Need a New Board

With this in mind I started researching some Cape parks (next to the ocean) that had elephants and discovered that one of the best; the Addo Elephant National Park had recently been expanded. How’s that? Along with more land, – no sea – it now boasts the Big Seven! Now you can ignore the cheetah and the wild dog as well, because they don’t have them. Haaa…

Yup! The Big Seven… elephant, rhinoceros, lion, buffalo, leopard, whale and great white shark and all in their natural habitat. Marine wildlife hasn’t really featured in the mainstream of the African wildlife experience. Whale watching is a favorite pastime in the Cape – but up ‘til now, never in this combination. Now there’s a park where these important animals can be viewed and all in their natural environment too. Sounds good? No… What’s next? African Disneyland? Aah, don’t tell anyone I said that.

Unique to the continent, the Big Five were South Africa’s prime game viewing draw card. Known as the most dangerous animals to hunt on foot, for a reason (get the picture); back in the days of the big game hunters, these animals could (and did) turn deadly when threatened. This made them a prize to bag and a brave man who did it. The Big Five gained their reputation at a great price.

Puzzling points here are, what is so uniquely African about southern right whales and great white sharks? There are many places in the world frequented by these whales and sharks and adding to this, the whale is not a predator (last I checked) – and eats plankton! And how can whales be hunted on foot? Oh, and who would want to hunt a whale, anyway? Don’t answer that question!

Don’t Forget the Cheetah, the Wild Dog, the Hippo, the Croc and the Eagle…

In my opinion, the phrase Big Seven makes a mockery of the whole endeavor in so many different ways. If the whale is being vilified and lumped with the great white shark (a fish, not a mammal), then what about the hippo? Hippo’s have killed more people in Africa than any other single animal. Does this make them dangerous? And the Nile crocodile? Never included in the list of man eaters – by the way. And when it kills someone, there is the question of who did it? So just shoot them all.

Never mind the old Big Five Game country. Having added the dangerous hippo and croc, we can then call them the Big Nine! And if you add the cheetah and wild dog, as some have advocated, you will have the Big Eleven. Happy now? I can just see the brochures! Come to Africa and see the Big Eleven Game, Land Mammals, Fish and Whale. OK! No! Let’s round it off and add the martial eagle and you have the Big Twelve! Come to Africa and see the Big Twelve, Land Mammals, Fish, Whale and Bird. How’s that…

Not all things fit in little boxes. The Big Seven will never have the mythology associated with the Big Five; the very phrase makes a mockery of the legends of Africa. To me, it’s an open and shut case.