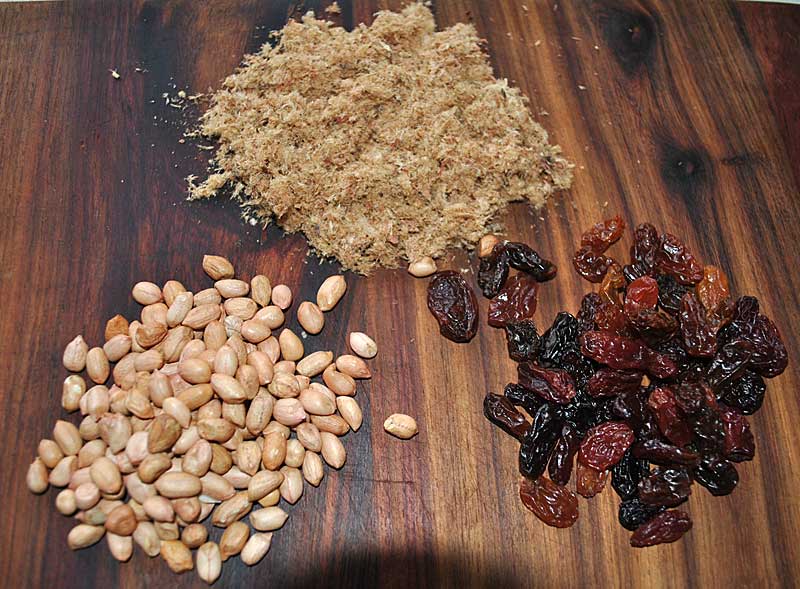 Trek food. Biltong, nuts and raisins. Mix it up and go. Ready to munch. Don’t forget the water.

It’s a given. Easy to carry and packed with power.

Trek food; biltong, nuts and raisins. You can’t forget raisins for love nor money, you may starve elsewise. I must apologize to all our vegetarian readers in advance, because this is not for you, sorry! Remember, sacred cows make the best hamburgers.

I was chided, because as a nature site – “why don’t you have an article on biltong, the way you make it?” Well now you all have it, thanks to one of our critics.

Biltong, – dehydrated meat – hunters, trackers, war heroes, sailors and a host of others, too vast to mention, have survived on dried meat of one sort or another. Any protein, from shark to gristle, all around the world is dried for survival food. Whether smoked or dried in the sun makes no difference. The fact is it is dried either way.

Salted, seasoned or vinegared, dried meat is venerated for its qualities as the original fast food. Old-time travelers will attest and history can verify that for thousands of years past, adventurers, soldiers and explorers relied on this humble trek food.

As advanced as man was after the industrial revolution, biltong as an emergency ration, cannot be bettered for ease and DIY – and don’t forget the raisins.

I am sharing an age-old family recipe for survival. Well, survival the way I like it, that’s hammered biltong, with nuts – and we won’t forget the raisins.

If you use the right ingredients, there is no reason not to add “Health” as your middle name and your biltong. As for nutritional value, biltong is worth more than three times its weight in prime, raw meat. Oh, and it can be cooked as well, if you so desire. Added to that, hammered biltong is the best trek food for travel ever – and don’t forget the raisins.

I think half the world would still be undiscovered if dried meats had not nourished the explorers to the end of their journey.

Sustained on biltong and water, a well-ordered army can stay put and fight, while their opponents ran back and forth to the soup kitchen adjoining the blazing fire. Ask any ranch-hand or vaquero how life would play out without their jerky.

I learned this survival trick from my grandfather – born in 1898 – an old and seasoned bush man most of his life. He called it trek food and so the name – to me – has always been that. Trek food as you have it here, has never been bettered by my grandfather, father or myself, for an easy-to-carry, safe, DIY power food.

If you can, buy – organic – very dry biltong, pull out a wooden chopping board and hammer it into shape. See why it must be dry? If it’s not dry enough, follow the procedure below and make your own. Note: this stuff has pulled me and company through some tricky situations in some very remote places. Remember, if starvation starts to set in with your group, you may start looking like the next meal yourself.

When your biltong’s good and dry, follow the pictorial I have put together. 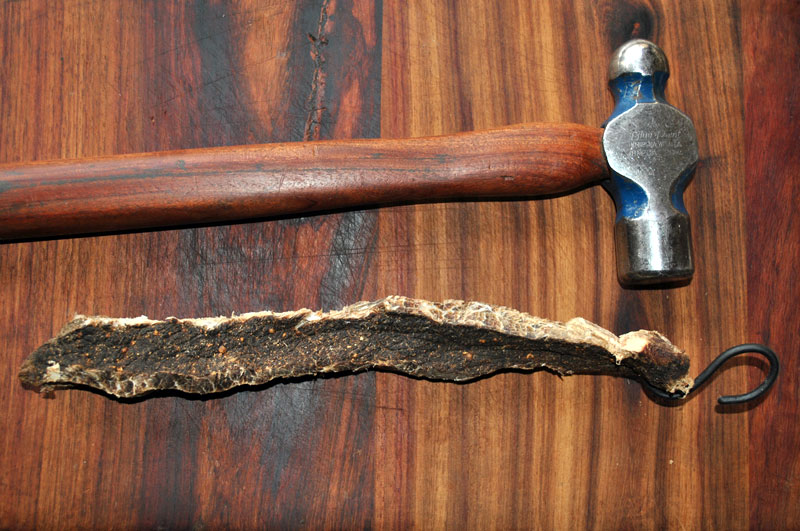 For store bought biltong, first trim off all visible fat, before putting out to dry. Once dry, grab a ball-peen hammer – no need to be a Blue-Point – and a chopping board. 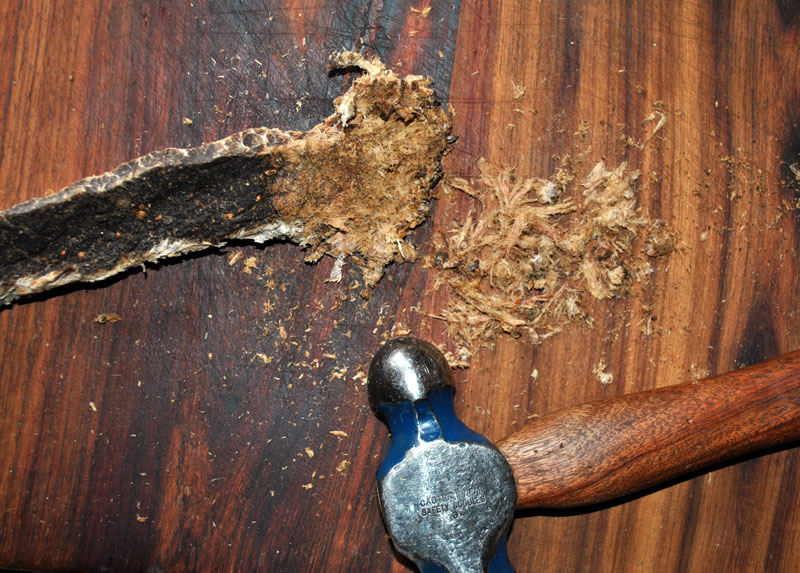 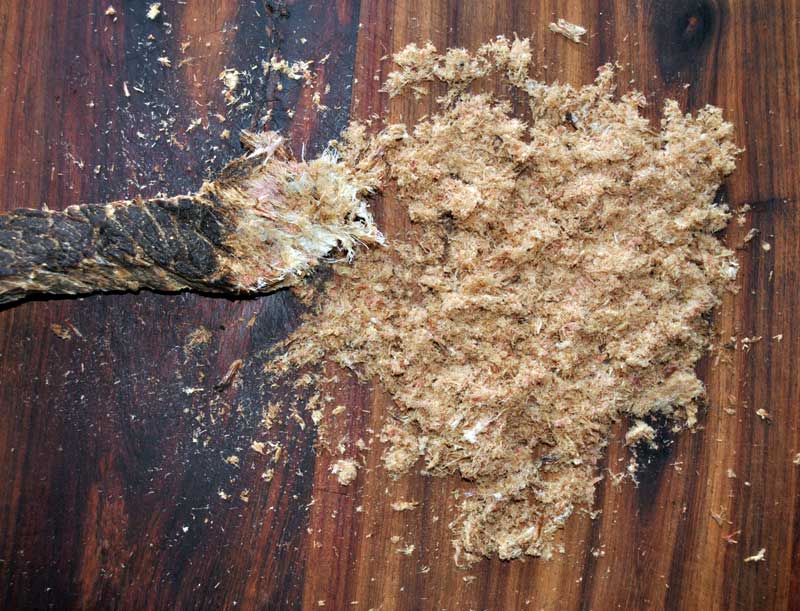 If you find your biltong is a little too wet when you’re ready, don’t despair, a trick I use for this, is to grate it with a kitchen microplane or using the fine side of a standard grater, works well. 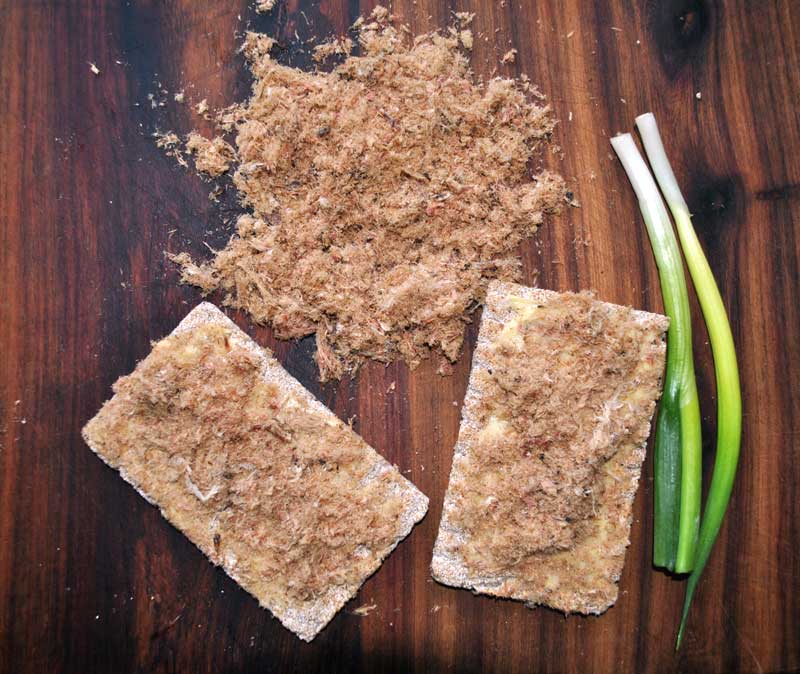 The perfect snack food and one of our favorite ways to eat hammered biltong trek food, is sprinkled on a thickly buttered slice of home made soda bread. Hammered biltong can be mixed in mayonnaise, stirred through cream cheese, sprinkled on salads or added to cauliflower au gratin.

Once the biltong is hammered, you cannot even count the many delicious ways of eating it. There are countless forms of healthiness you can make from a supply of this food and it can be stored for years in a glass bottle, or if keeping for short times, a strong brown paper bag well sealed lasts for many months.

That brings me to the various kinds of common dried meats still used. Yes, the recipe to the health biltong is below, if you want to go straight there.

It isn’t that it’s dried or smoked meat; it’s how it got there that makes the difference for all round taste and sustainability. Ever tried charqui – sun dried from South America?

What about ch’arki, originally taken to Mexico by the Spanish. Did the Texan style smoked and dried meat, made in much the same way, derives its name from the ch’arki to become the anglicized jerky?

Then there’s dried fish – mostly sun dried – and we have all heard of dried mopane worm, dried shrimp, shark, smoked salmon, dried anchovies, Maldive fish and the list goes on.

But the healthiest dried meat is still biltong, made from the best parts of the animal. Tradition sets the stage for how the meat is processed. Jerky is traditionally made from the lesser cuts of meat and leftovers, whereas biltong is made from the prime cuts. Here the lesser cuts were eaten in dishes before they went off and the rest turned into biltong for the days to come.

Dried in the shade, is gold. It’s not a law, but biltong is best dried in the shade – preferably in hot/warm, dry weather – and best in winter when parasites are at a minimum.

A tip: Cardboard chip/crisp boxes and 60 watt bulbs are substituted in cold climates and work well, or check this setup out at Yuppie Chef.

Well-cured biltong will keep for more than a quarter of a century, holding its quality and taste intact. If it’s older, it can be reconstituted into hot food by boiling in water – your choice. I have eaten impala biltong eight years old, and from my memory, tasted better with more concentrated flavor, than when it was first made.

Best cuts of meat to get from your supplier are fillet, rump or sirloin. After removing all visible fat from the meat, cut into strips – with the grain – 2 x 4 x 20 cm or longer. After cutting up your fresh meat for drying, get a shallow bowl – or enamel basin – to hold your meat. I find broad pieces take too long to dry and don’t marinade too well.

The thinner biltong will slice and hammer more easily. Always take into account shrinkage on drying.

When the meat is cut up, marinate it overnight in your pre-prepared, secret sauce, which consists of organic apple cider vinegar and optional flavorings. Be sure you have enough vinegar to marinate all the meat.

For 1 Kilogram of prepared meat:

I add 1 drop of oil and 1Tbs of Madeira port per kilogram of meat. Ad oil to the port and mix into the vinegar.

The next day, when your meat has marinated overnight in the seasoned vinegar, it is time to dust with your pre-prepared dry spices and hang up to cure.

Mix the salt, pepper and coriander together in a large shallow bowl. After taking your meat, strip by strip and rolling each piece in the bowl of spices as described above, apply a biltong hook – butchers have them – to each piece and hang up to dry.

Now that leaves the worst part, the waiting game.

Right… maybe we’ll be getting a flurry of health biltong in the supermarkets. Whoopy! Don’t forget the – sulphite free – raisins.

Now, to start a revolution… any ideas?