There’s Bird Bathing and Then… 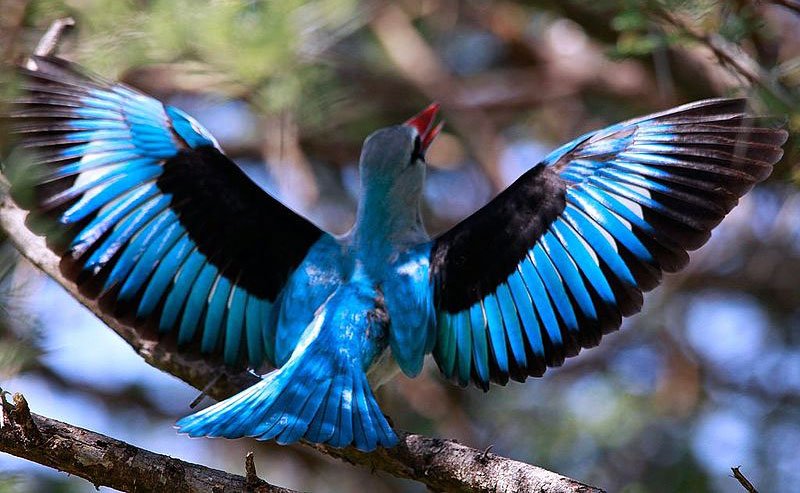 In these sequenced images, you will see the two birds diving from a nearby Delgoa thorn tree, which I hope you will enjoy as much as we did. 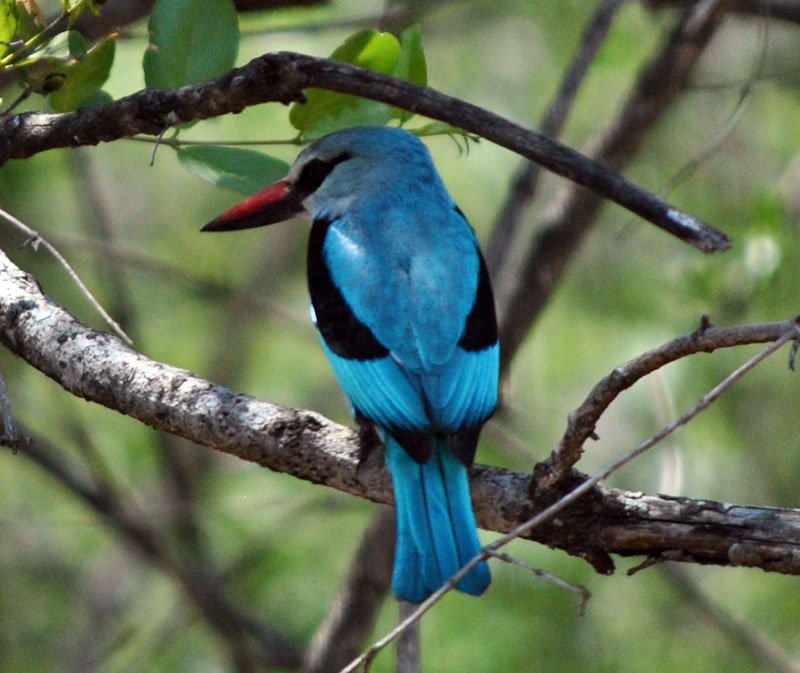 First there was one.

These birds make an epic image bathing. First there was one woodland kingfisher—Halcyon senegalensis—then all of a sudden, a second one appeared. And even better, they settled above a concreted game drinking waterhole. 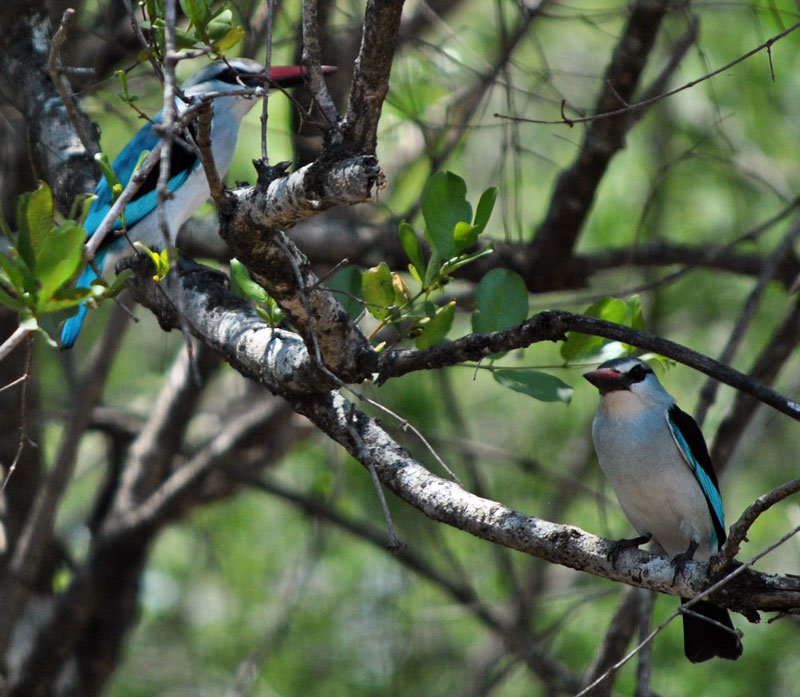 And then there were two.

I wondered, are they going to bath or drink? Fetch the camera! Let’s see. The water was way too shallow with no fish inside either. Usually these birds rely mainly on land and tree creatures and very little on fish for food. And then, dive they did! 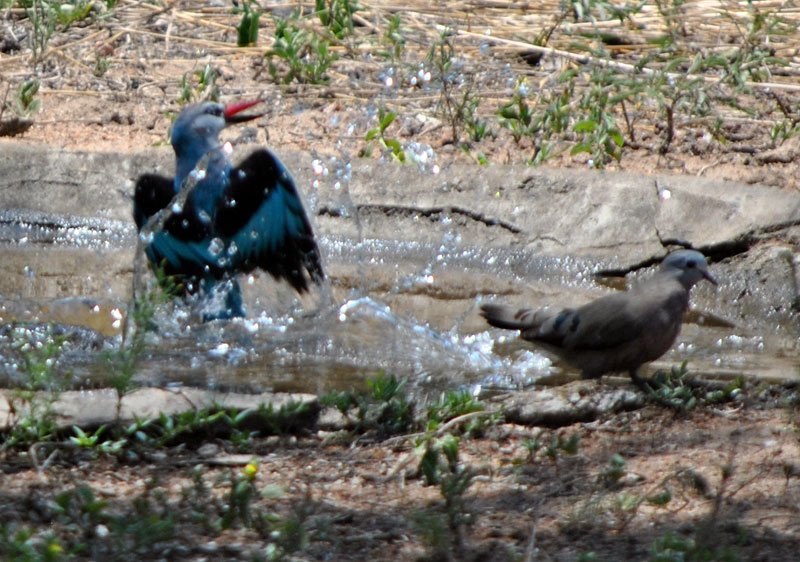 Emerald spotted doves don’t scare easily, even with missiles flying overhead. As you can see.

Madness, I couldn’t believe my eyes, the water was no more than 75ml—3 inches—deep. Worried or not, I kept photographing, hoping against all hope they both knew what they were doing. Yes they did, because the mate was also diving. 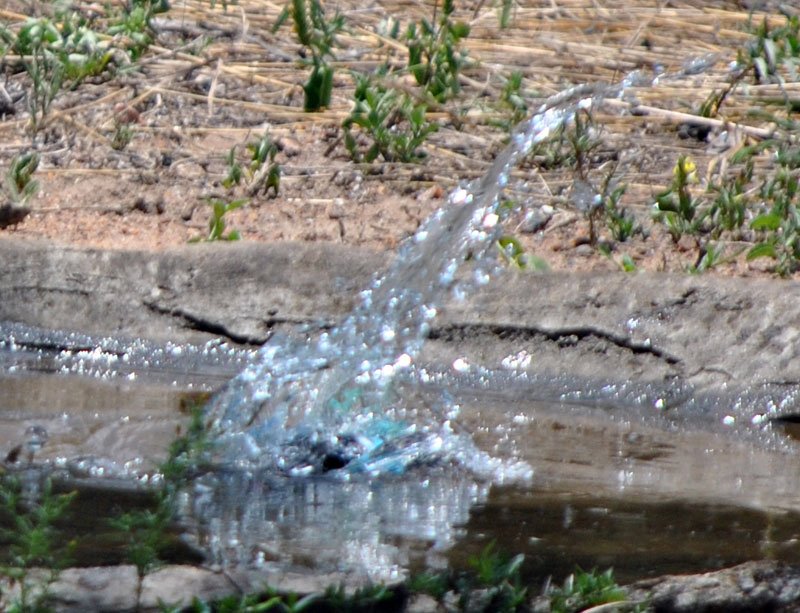 Almost got the shot in the air. These birds are really fast divers.

But try as I might, I never got one image of either above the water diving into the pond. This one shot almost made it, as you can see. One-split-second-earlier and I would have had it! 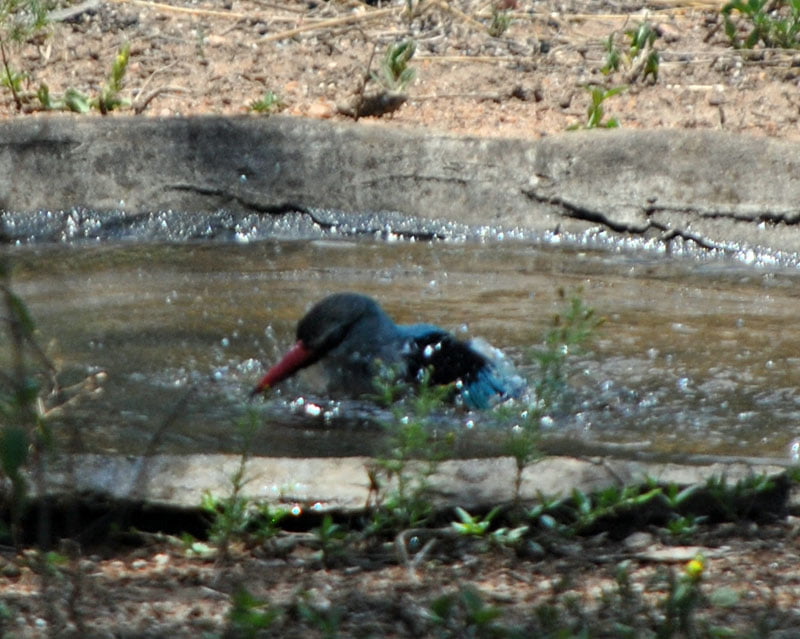 These little birds are deft and skillful hunters, often sitting very still on a branch in the deep shade of a tree watching, before suddenly diving out and grabbing a meal off the tree trunk or out of a tuft of grass. 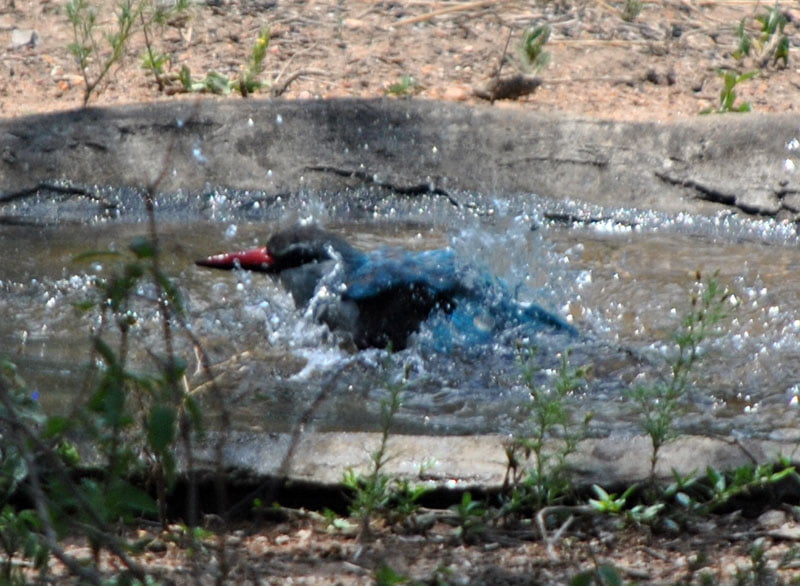 I’ve often seen them picking lizards off my studio window while I paint. These birds — and the striped kingfishers — are unlike their other colorful cousins. 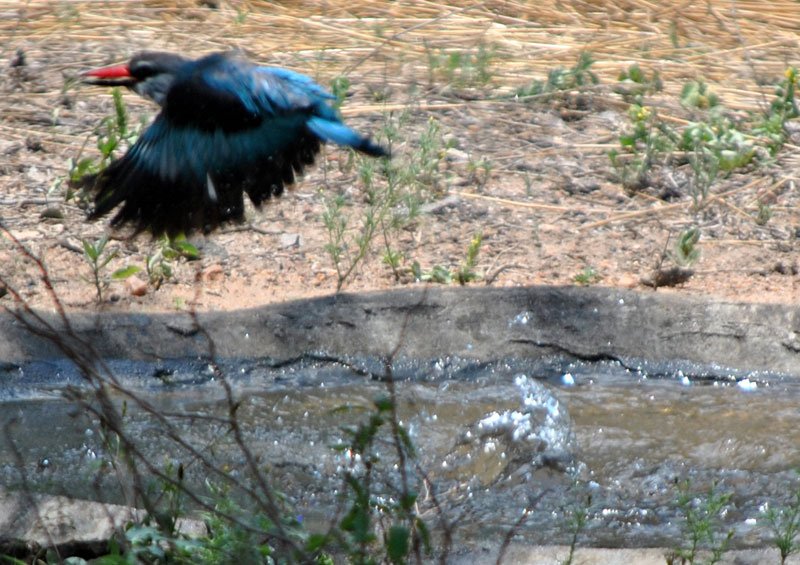 The speed of these birds, is something to see.

They nest in inactive barbet or woodpecker holes in trees, like these bushbabies who got evicted when summer returned and with it, the rightful owner. 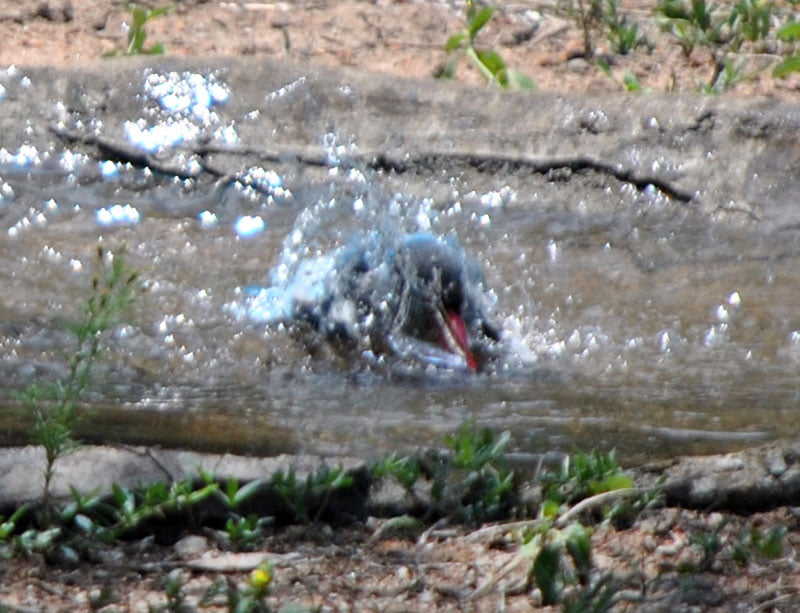 You can only tell which side is up, from where the beak is.

Woodland kingfishers are monogamous – mate for life – and when they first court one another, it’s a noisy and colorful sight. If you’ve seen it once, you will never forget the spectacle. 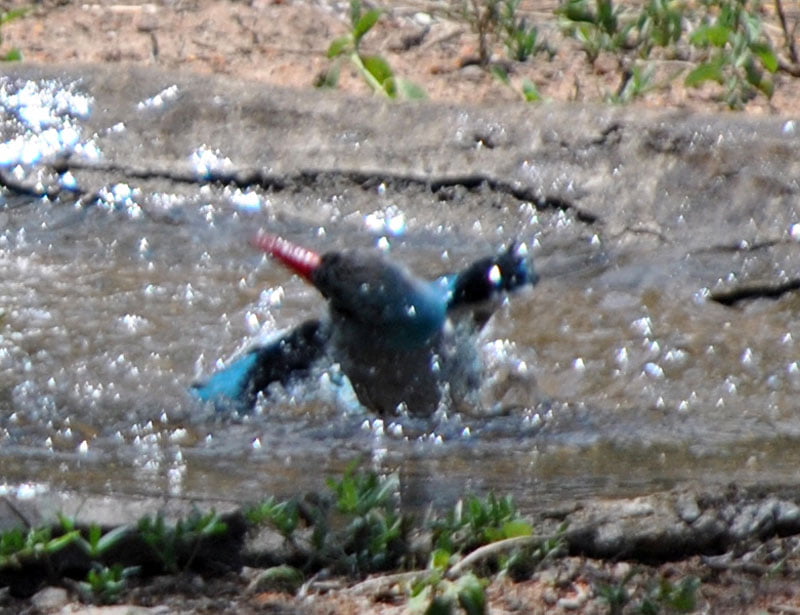 Pity I was so far away. But any closer would have scared these birds, because one bird is always watching.

Check the volume button is switched on.

The male sits on a very visible branch in the tree and begins to shriek, as only woodland kingfishers can. While shrieking, the male displays as much color to the female as he can muster, with wings spread wide open from front and back. 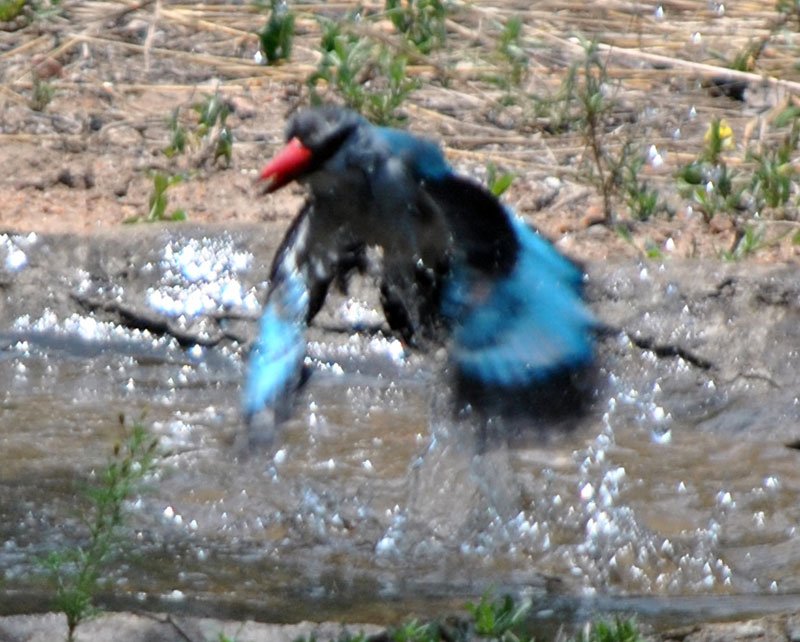 The female is treated to the pure white and black of his front side and all of the blue and black from his back, while he alternates back and forth on the same branch over and over. If this fails to produce a response he will chase after her and pick another site for a repeat. 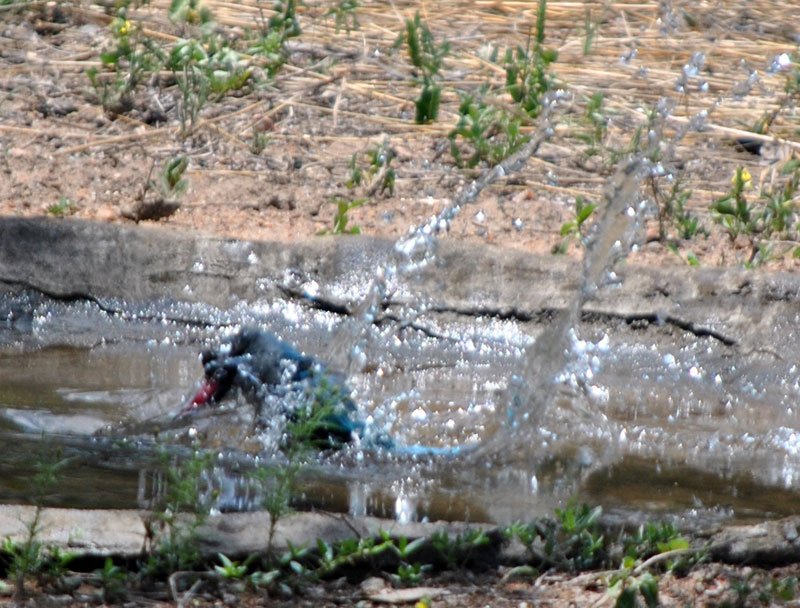 Should the female take to his display, she will settle down on the same branch next to him and sometimes perform the same gestures suggesting for him to feed her. If this prompt works, she will get fed the best food he can find and this is where the acid test begins. 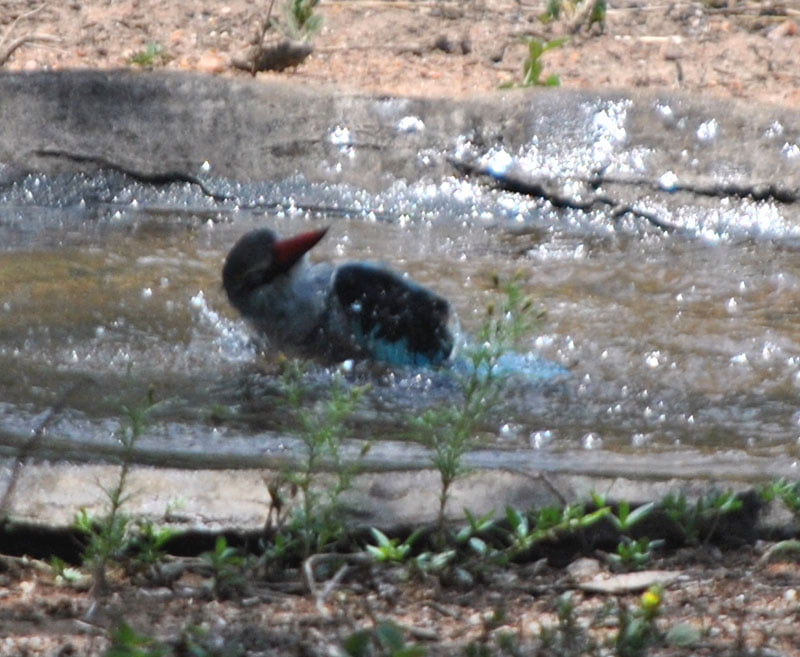 Maybe they also get water in the ears?

If she likes his meals, which better be good, she will mate with him but not until he has fattened her up for some time. 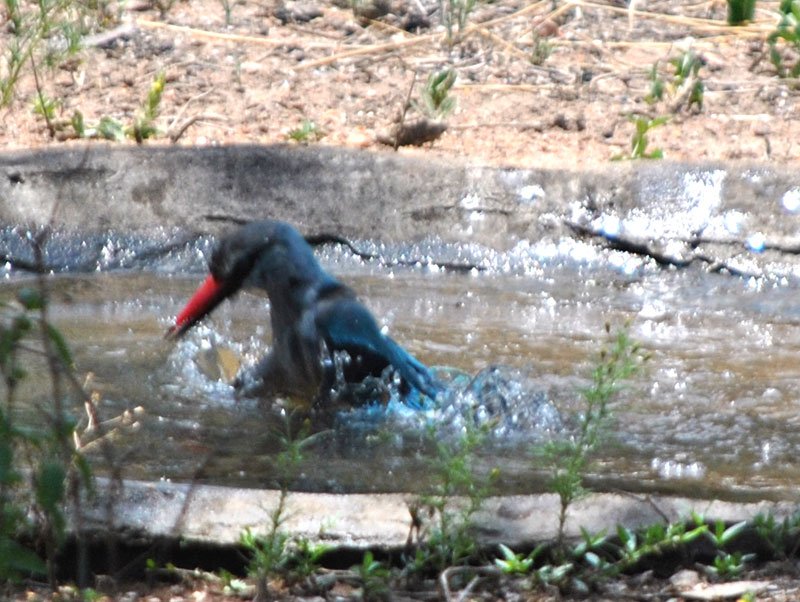 Would have made a brilliant water-polo player. Where’s the ball?

Don’t be fooled, people have often mistaken these actions as the parent feeding its young. This has a positive result because she is developing the necessary strength to breed, lay her two to three, pure white eggs and look after the young. 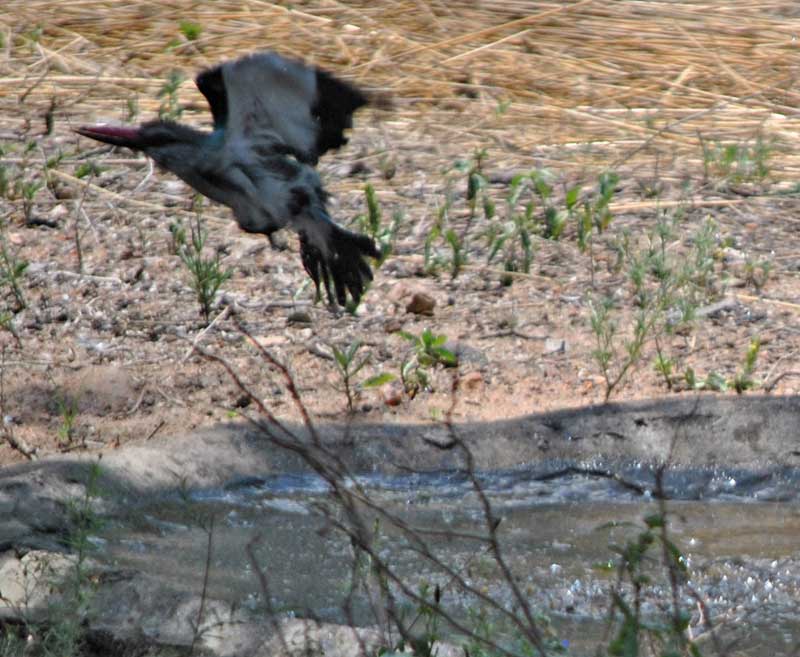 Back up to preen, then back again.

Later, when defending their territory, for which they are very jealous and quick to protect, both birds will display their outstretched wings and screech. In this way, they make a most objectionable fuss until the intruders are scared off. 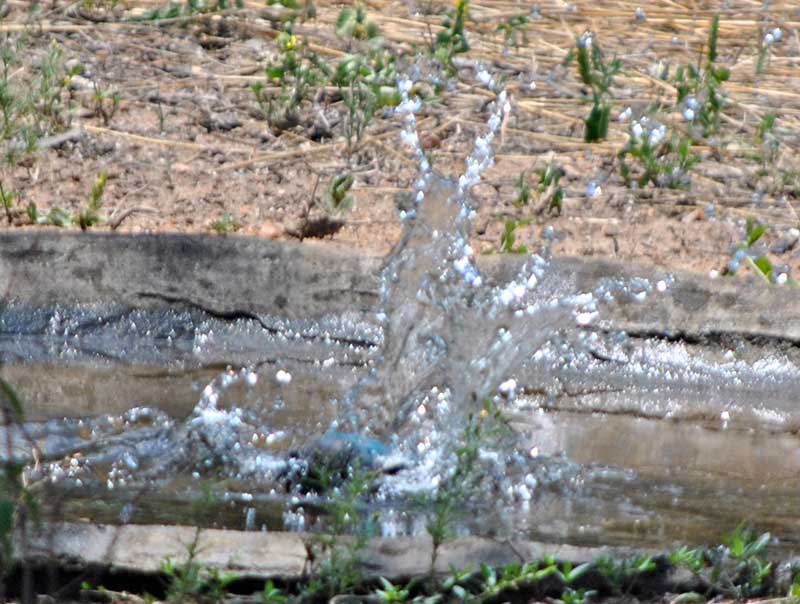 Back with a splash and a disappearing act.

If for any reason one of the pair die, the other will not take a new partner again and will die a loner. 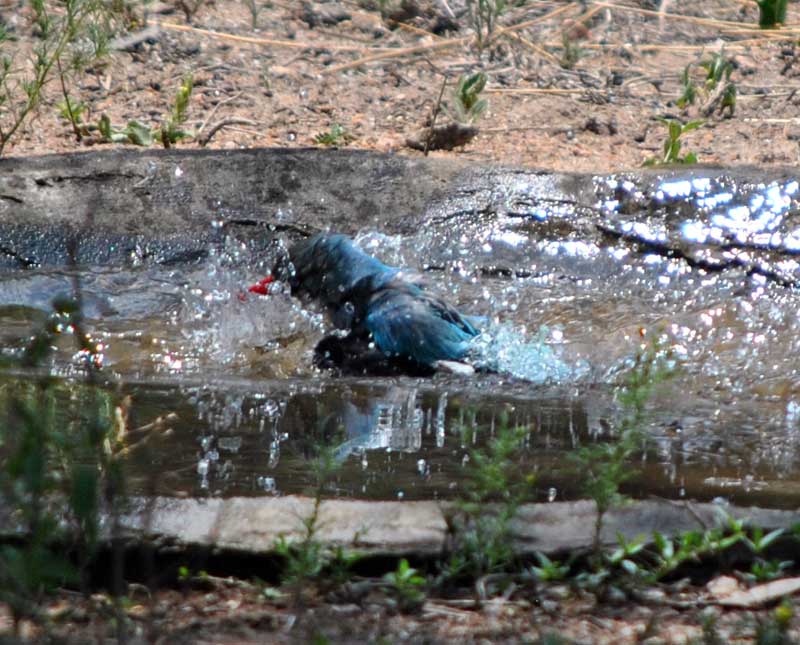 These birds are very addicted to bathing and in fast fashion too. These are very rare shots and it’s the only place I’ve seen this.

All-in-all these birds have a wonderfully happy presence wherever they are found and if you are fortunate enough to have a pair near your home, you will never be bored. 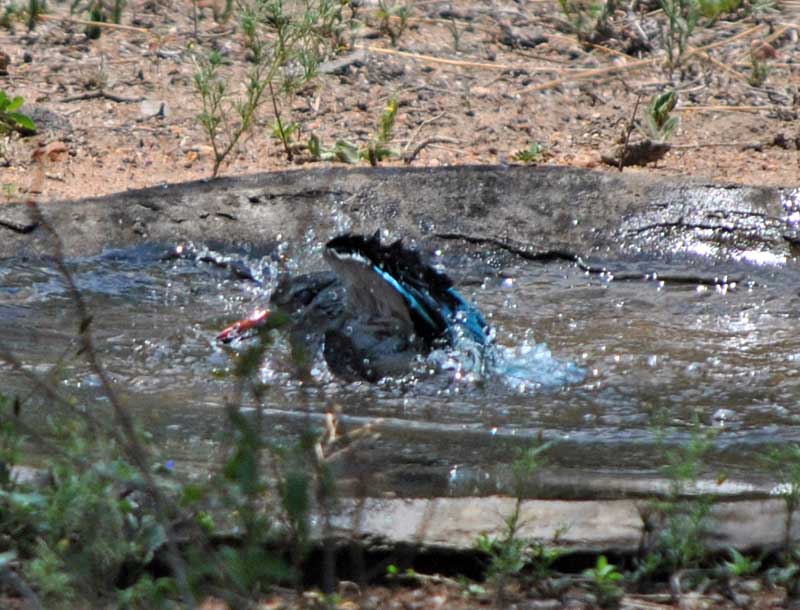 Despite its name, the woodland kingfisher does not dive for fish, but eats land creatures such as lizards, mice, grasshoppers, dragon-flies and frogs. They have been known to do shoreline fishing but seldom sustain this notion unless there’s a shortage of nutrient-rich food or a need for supplements. 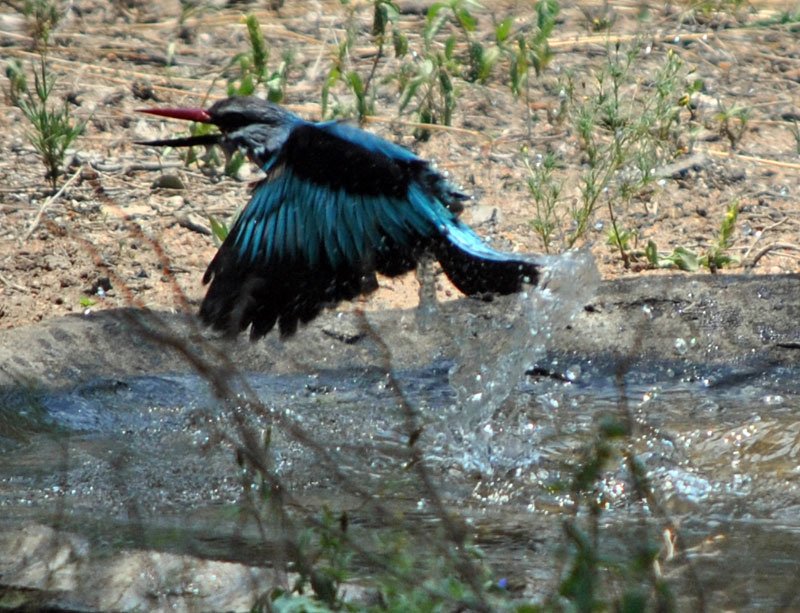 Bathing is when these birds exhibit a stealth and unparalleled skill for diving into almost zero depth water. I photographed this action a little while ago especially for Wildmoz. The water here was greatly reduced in depth, leaving as I mentioned before, some 3” of water to dive into. 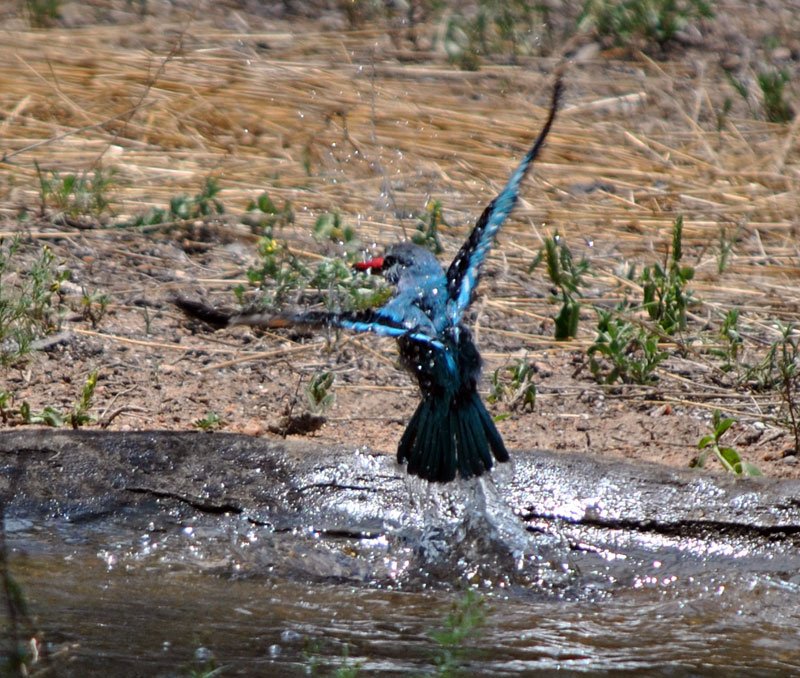 Why dive, you may ask? That is a question I cannot answer, except I think, they love the action of bathing and at the same time showing off their unusual accuracy. Try as I may, I never got a shot of either bird as it was about to hit the water, but I came close. Sorry, maybe next time! 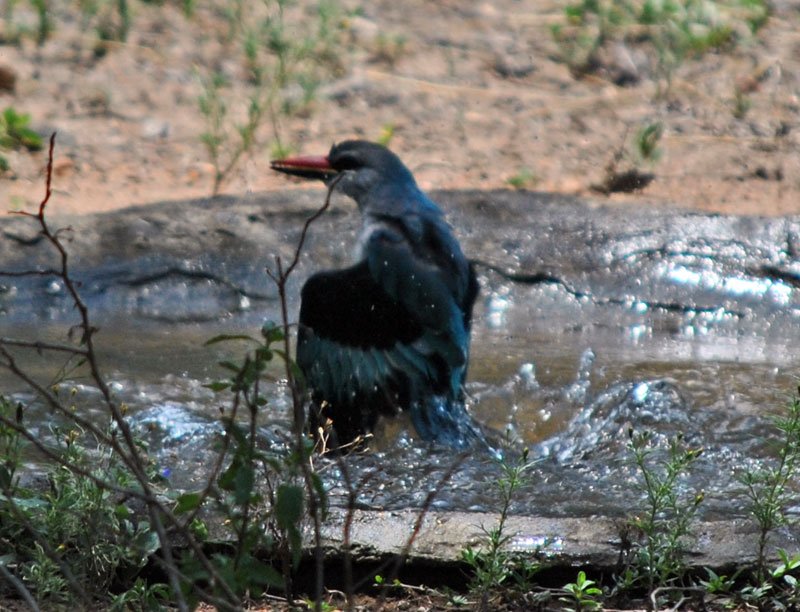 Now you’ve seen it for yourself. The woodpecker water tail walk.