Do “Gentle” And “Badger” Go Together? 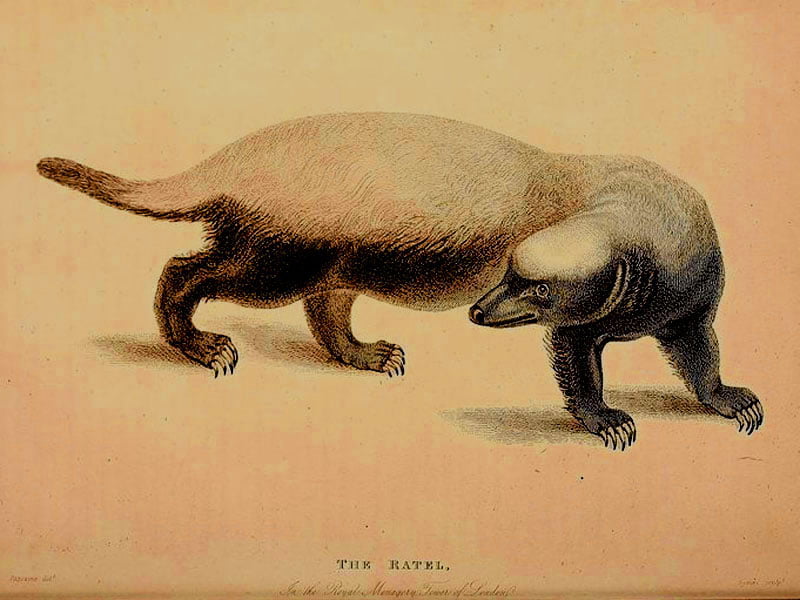 A print of a honey badger at the Royal Menagerie Tower of London.

‘Don’t badger me’ has many meanings

Badger Mellivora capensis meaning honey devouring badger. But they actually eat anything, mostly they are carnivorous.

As a young boy in the bush, I was taught that there are two creatures you cannot reason with when threatened and that was bees and honey badgers and they invariably come in packages. Don’t get me wrong, I love both bees and badgers, for different reasons of course.

Badgers love honey – which makes them hyperactive – but it’s the bee grubs they like the most, so finding them together is not too uncommon. When bees have young they are more protective of their hives than usual. Bee stings don’t affect honey badgers because their skin is too thick. In fact, this tough skin is an attack weapon for a badger when bitten by, say a lion; the skin is so loose and flexible that the badger can swivel around and attack the lion’s eyes.

If you have heard of – or know – the skunk and its smell, then you can understand one of the badger’s defenses, because it does the same. By all accounts it is a most disagreeable creature to be on the wrong side of. 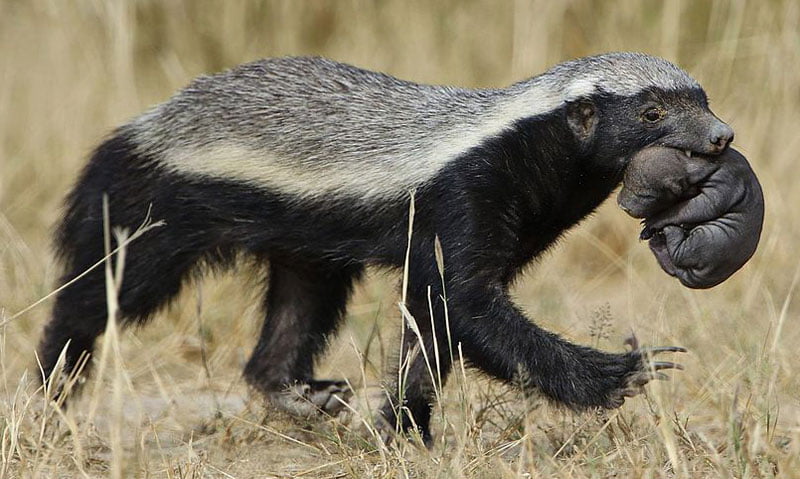 They start out rough and tough. Image source.

Also you may not know that this is the most fearless mammal in the world, according to the Guinness book of records. Sometimes avoiding a honey badger can’t be done and that usually means trouble.

Not long ago, C and I were woken by a noise that can only be described as tanks plowing through the bush and coming straight for the house. The commotion in that bedroom was nothing less than comical and I made it to the door first. The sound was consistent with what sounded like roars and snarls that made my hair stand on end.

It was round the back and I told C to stay inside while I inspected. The sound was coming from a corrugated reservoir used to store water for the garden and veggie patch, but I knew it was empty which must have added to the sound. I could not work out what was making the noise inside or outside, although I knew it was animal, but what animal?

Caution was definitely applied while I first waited for the animal inside – I think – for a moment to slow down so I could better distinguish its identity or whereabouts before I ventured any closer.

Remember it’s dark and I’m not properly dressed for this caper! While I was waiting, my mind drifted to my grandfather and how he was attacked by a lioness in his dressing gown, not a comforting thought.

The noise never relented and in vain I waited. Puzzled, I slowly approached the wall of the reservoir still hoping the thing was inside and would stay there for now, and slowly stepped up on a concrete block we use to look inside. When I shone the torch in the direction of that deafening noise, I was immediately attacked.

In a flash, I saw it was a honey badger that had hit the wall under me with such force that I thought the bolts had moved. It had been growling, scratching, jumping and biting the corrugated iron sides as if it was their fault for wrapping it in. 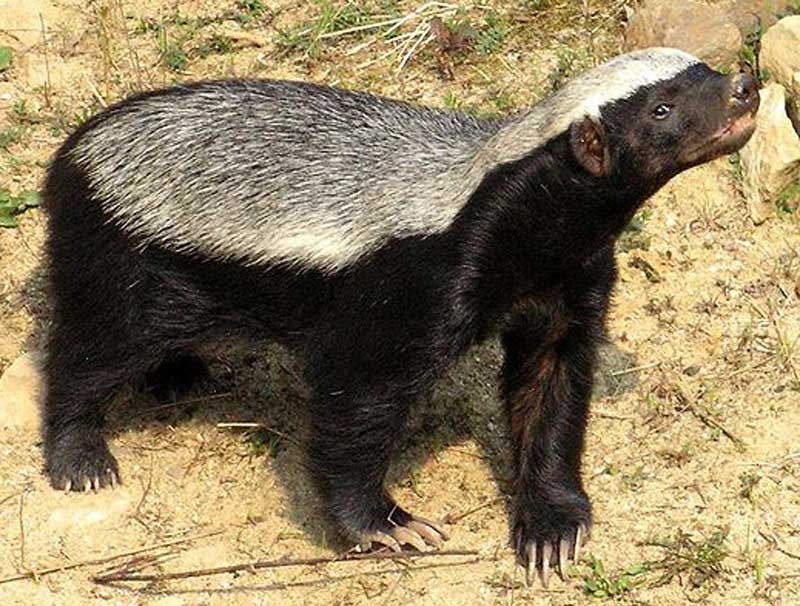 OK, so what now? I am not going to save any honey badger from anywhere and most certainly not from a reservoir. I shouted back to C to tell her what it was and because I shouted, I got a resounding chewing out by a haughty growl from our unhappy friend!

Every time I looked over the edge I was attacked as if I was the one attacking it. Well I can’t blame it, but how did it get inside and why?

We take great care to only use a portable ladder and have no steps leading up for any creature to fall in, as this one did. The only way the badger could have plausibly got inside would have been up the pipe that leads in the water.

But how? If the pipe was the access route, we will never know. I was not going to look over that wall again because the smell they deliver when they think they’re trapped is beyond comprehension and after all, it’s inside a water tank.

Next comes the rescue mechanism. One log over the side, let go and run for your life. That simple! When that badger climbed out, it jumped down no worse for wear and proceeded to circle round the big reservoir looking for something while it growled non-stop and so it went on its way, growling until we couldn’t hear it anymore.

I could tell you lots of facts about badgers but I think a video as best. This way people who want to know more about these otherwise very cute creatures – who generally enjoy their own company best – and what they can get up to.

See this next funny video for some answers to how the badger could have managed to get into the tank and when you see the video you’ll know anything goes.