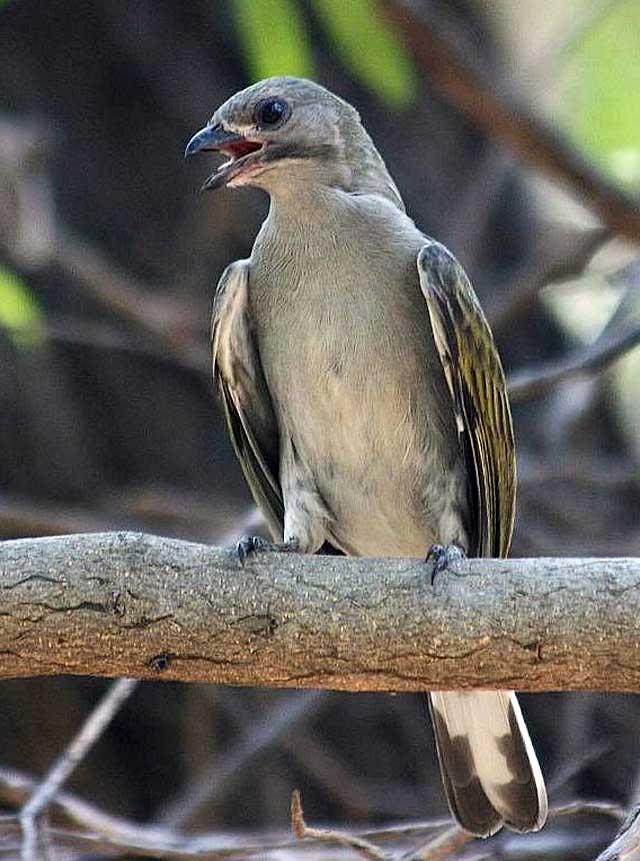 Honeyguide from the Kruger Park

Honey to the rescue

Long, long ago somewhere in Africa… When the earth and all the people and animals were new… One long dry season, a drought had gripped the land and man and beast were forced to travel far and wide in their pursuit of nourishment.

There was an old hunter so weakened in his search for some food that he could only use his spear to dig in the ground for roots to eat. While digging, he found ant grubs and needing to reverse his weakened state, he ate them to build himself up once more. This, he hoped would restore his strength enough to continue his hunt because his family needed food to eat.

While he was digging up the ant grubs a little bird landed on an old dead tree next to him, chirruping as loud as it could to get his attention. Looking up, he thought the little thing might be as hungry as he was since, when he stood up to get a better view of the bird, it never flew away. Surprised by this, the hunter stepped back, but not before he had scattered a handful of the grubs he had been eating on the ground under the tree. To his wonder, the bird was still not afraid and chattering away came down in front of him to eat his offering.

As soon as the bird had eaten its fill, it jumped back onto the branch where it had sat before. Only this time, it chatted back to the old hunter chirruping, “chekit-chekit-chirr,” flapping its wings excitedly, looking the whole time at the hunter. Then it flew off, singing “chekit-chekit-chirr.” And flew back, still looking at the old man while chirruping. It did this a number of times.

The old man thought the bird was trying to tell him something, so he “brrrrr-yumed,” back at it repeatedly, following it, this time, thinking the bird was thanking him for his kind offering. This may be so, because the little bird lighted on a branch not far off,  chirruping away until the old hunter reached him, still singing “brrrrr-yum, brrrrr-yum” as he went.

No sooner had he reached the bird when it flew off again, calling him to follow it. It seemed like the bird knew the old hunter was weak and flew back and forth giving him encouragement. This went on for some time with the bird chirruping and the old man answering as he followed. All of a sudden, the old hunter heard bees humming and flying all around him. Observing the bird, he saw it go back and forth from him to a crevice in a large tree that seemed to contain the bees and their hive. It did not take the old hunter long to realize this little bird was hoping he would fetch out some honey for them both.

This honey was exactly what the hunter needed to revive his strength and at the same time feed the little bird. Taking his spear, he began to dig at the opening in the tree to extract some honey combs for him and his little friend. All the time the little bird flew around and around with its encouraging song.

From that day to this, the little honey guide leads people to wild honey in the bush. Now you know how to attract the honey guide by singing “brrrrr-yum,” repeatedly in a high pitch. The honey guide will hear you and answer with his call of “chekit-chekit-chirr”, to lead you to a new bee hive somewhere in the bushveld for wild honey.

Always leave something for the little bird, remembering how from times of old the honeyguide saved an old hunter and his family from starvation. To this day, the honey guide when he hears the “brrrrr-yum” call of a human, will always lead them to honey, sometimes near and sometimes far.

The moral of the story you say? Always keep alert and cheerful; you never know where your next meal will come from.

One day as a young man, I was two kilometers from camp and on my way to check on a windmill at a watering hole. While crossing a dry riverbed in the Timbavati, I was attracted by incessant calls from a bird in a jackal-berry tree, it followed along with me on the far bank of the river. Having never been led by a honey guide, this was a new experience. In my curiosity, I followed the bird who led me right to a tree housing bees in a crack. I must say, it was a very happy experience I have never forgotten. Some people believe the honey guide leads badgers to honey but this has not been proven as of yet.