Net-Gun Capture Is the Name of the Game

It’s all done by helicopter except for a small team standing by for the necessary assistance.

Game capture using nets from helicopters has been used for a long time by conservationists and wildlife vets. This net method – originally used in New Zealand – saves many lives and makes life for conservation that much better.

To the uninitiated, catching an impala seems like a fairly straight forward procedure. Normally with accessible terrain, this is the case. But what do you do when working in the high plains, among hills and valleys means capture teams, trucks and equipment have to be left behind?

In our video, we show son (Josh) with weapon and pilot from AWMC rounding up a herd of impala in order to capture two for a client. When doing only a few animals, this technique is one cost-effective solution for small game, allowing them to be caught, with the least trauma, equipment and expense.

Research has shown that when properly executed net-gun capture can be less stressful than darting.

Using only a helicopter, a capture net-gun or helinet and a small field kit, our two intrepid heroes show us how the professionals do it. 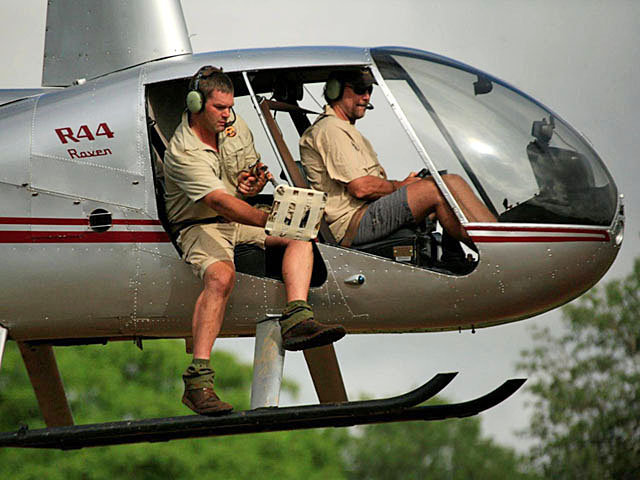 The Helinet capture device being tested.

The helinet and how it works from images. This is Josh demonstrating the unit on a wildlife capture course. 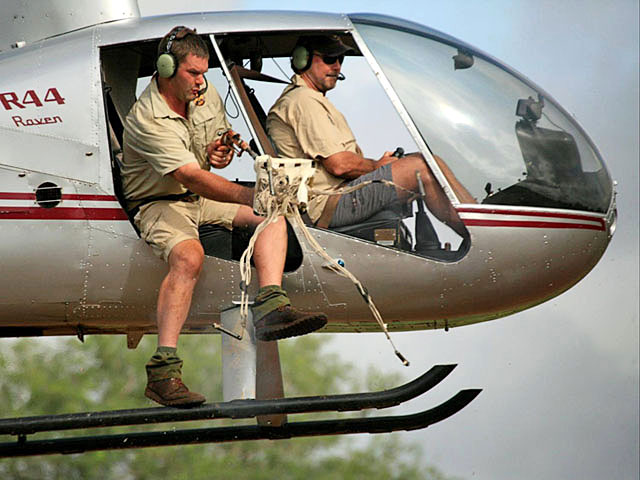 The helinet being launched.

The helinet as it is launched; you can see how the weights are shot outwards taking the net with them and opening it up to “fall” over the animals.

The video below begins as the herd of antelope are located. Getting in position where a launch is possible isn’t easy and it takes a few passes before the helinet can be used. Only one animal must be singled out. Trying to capture more than one animal increases the risks to them and generally doesn’t work. Antelope naturally huddle together and the pilot has to separate them for this occasion. The first shot strikes home and a young ewe is caught.

Now the team must move fast. As the helicopter lands, Josh is already out and grabbing the field kit. The Impala must be immobilized and sedated as soon as possible to avoid unnecessary struggle which leads to heat build-up, stress and possibly injury.

The helinet has done its job and the ewe is down but still struggling. The first thing to do is calm her down by closing off the eyes with the blindfold attached to field kit. Then a sedative is administered as soon as possible, via intramuscular injection. The net is then removed. At some point during this process, the ground team arrives to assist.

Normally, impala and most other plains animals are caught using capture bomas, large temporary barricades and corridors made of nylon plastic sheeting, cables and guide ropes. Large trucks and a team of dedicated workers are required for every capture.

Here in the African highveld, we see one way the helicopter has revolutionized game management, allowing a small number of animals to be caught for testing, treatment or translocation. Before if one animal was needed, it was simply darted and that was that, they say. In an industry where one needs to be prepared for every eventuality, this is simply another tool in the box.

Interestingly, research has shown that when properly executed, net-gun capture can be less stressful than darting.

The Old vs the New

What you see above is remote game management by helicopter. See how hard it is to capture these fast moving impala, even with an experienced helicopter pilot and a game-wrangler like Josh. I know of many game managers of yesteryear who would have wished this method was available back then.

Technology is making new and better inroads in good game management in today’s conservation world. Because of the increased value of animals, more money and therefore better technology can be implemented for wildlife management in our modern times.

Next week, we will bring you yet another clever passive capture method, which is going down very well.

This video was taken by Josh’s GoPro and this is the YouTube entry by Wildmoz.