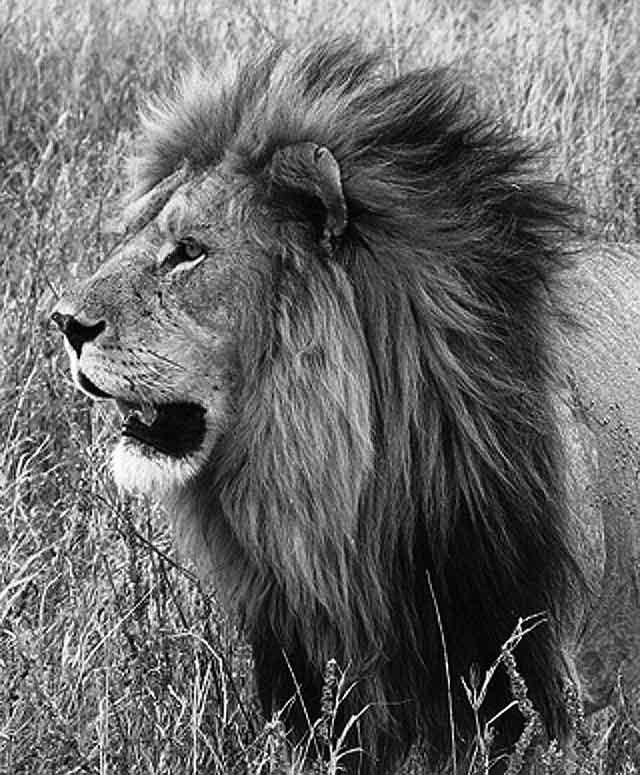 Even Lions Need a Doctor

Dr. Jacs Mostert was called in to repair this magnificent lion’s wounds, to prevent blood-born parasites and infection. Apparently, this lion got into a fight with another male.

This is a holding pen – or lion fight Emergency Room – where the lion will be kept until he is ready to go back into the wild. This was an emergency procedure, seeing Dr. Jacs was in the area. Note the stopgap blindfold – a jacket borrowed off one of the rangers. Fortunately, the team always travel with their emergency supplies at all times but the blindfold they carry is for antelope and would never fit the lion.

Because of the scarcity of lions in the north of Zimbabwe – I am sure you have heard of the Cecil killing – you will understand how valuable lions have become in this region. Therefore, every effort is made to save injured lions when possible.

Injuries to the spinal area are always risky to leave for the animal to take care of itself. Treatment is the wiser choice to prevent blood poisoning, gangrene or spinal infection. This lion has deep puncture wounds that left holes in the spinal region as you can see from the pics. 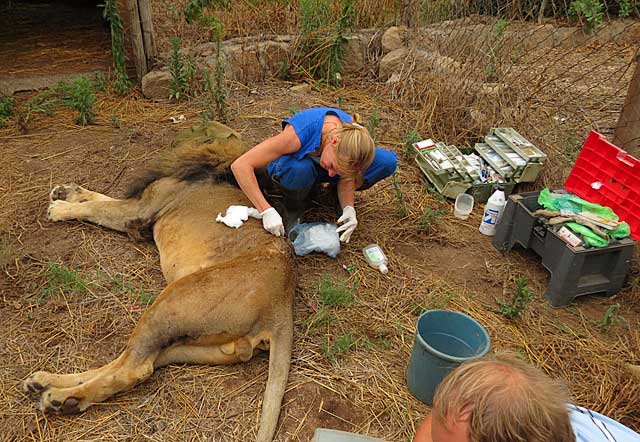 Vet, lion, baggage and all

Male lions defend their territory against other male lions while the lionesses take on other lionesses. Females do most of the hunting. The males eat first -average daily consumption of about 7 kg – when he has had his fill, the females join in and consume an average of 4.5 kg each.

The only time this rule was known to be broken was when lionesses were observed removing the prey’s liver to feed to young cubs just old enough to eat meat. Cubs are weaned between three to six months but often die of starvation. 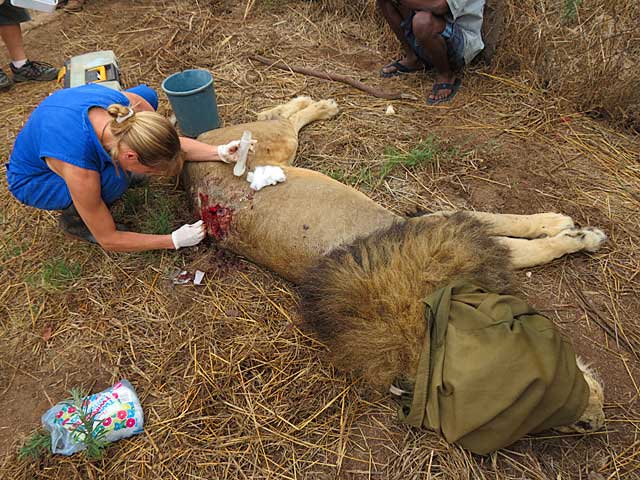 A lion with a spinal injury

Although the lion is known as the “king of the jungle,” it lives in grasslands and plains, never venturing into rain forests – jungles. 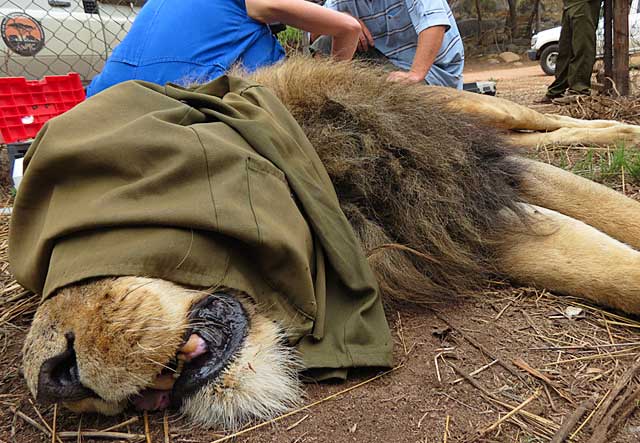 Individual lions can be identified by the spots at their whiskers, each one’s marking is unique to that particular lion.

Lions are generally placid during the day and can sleep and rest for up to 20 hours. However, at night, the same placid lions become extremely dangerous. Lion’s most successful hunts are normally on dark nights. 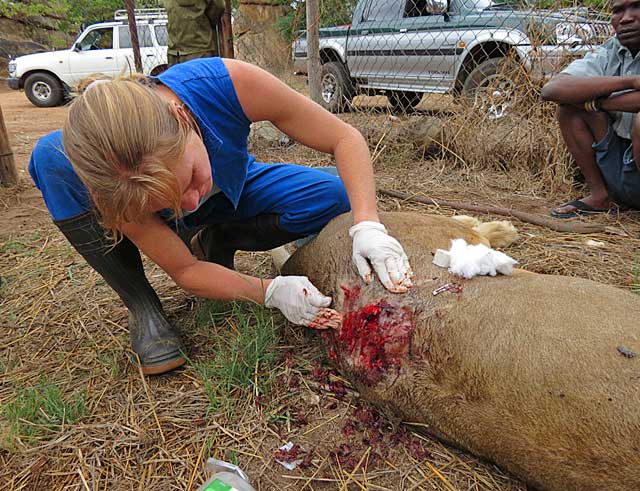 Lions are listed as vulnerable on the IUCN Red List of Threatened Species. They are threatened by habitat loss, canine distemper (transmitted from domesticated dogs), and bovine tuberculosis – transmitted  by Cape buffalo (originating from cattle). 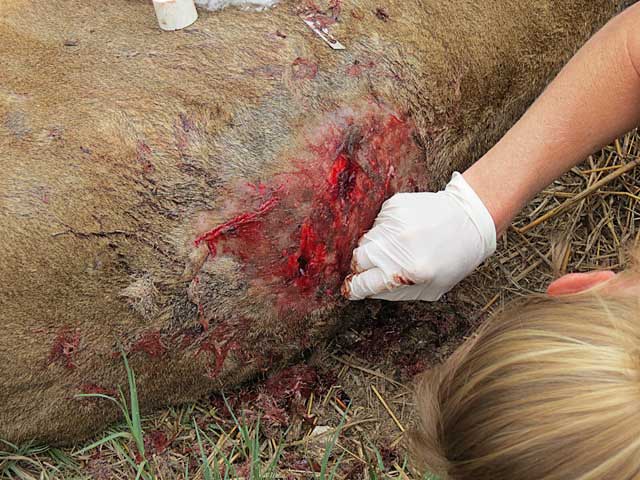 Saved just in time, with no serious infection

Unlike other big cats, African lions are sociable and live together in groups called “prides” consisting of up to 15 or more lions. 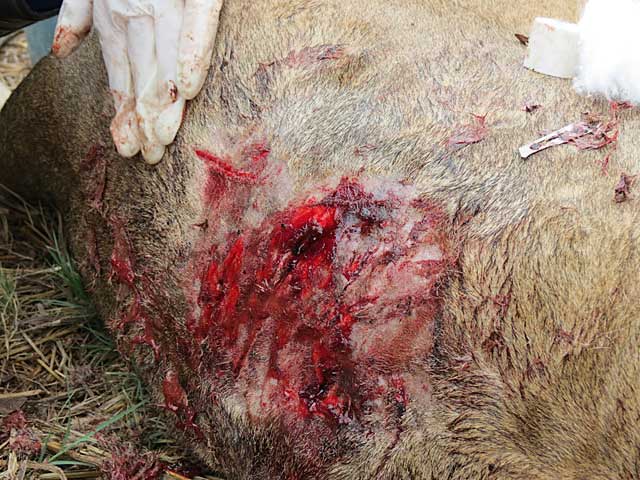 Some puncture wounds for attention

A good gauge of a male lion’s age is the darkness of his mane. Generally speaking, the darker the mane, the more mature the lion. 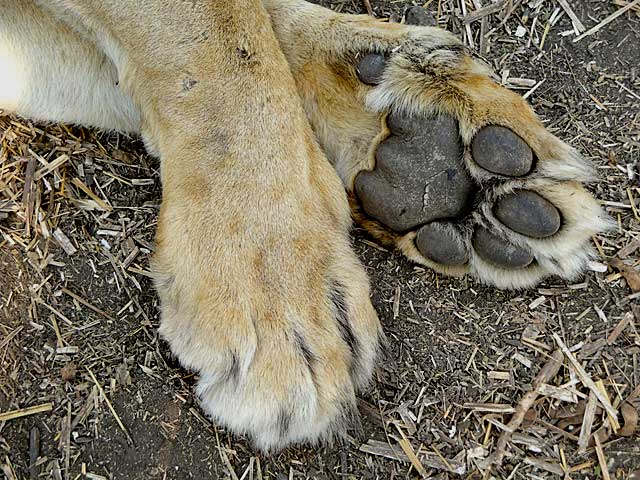 A good time for a general inspection

A lot can be seen about a lion from viewing their paws.