Give a Dog a Bad Name 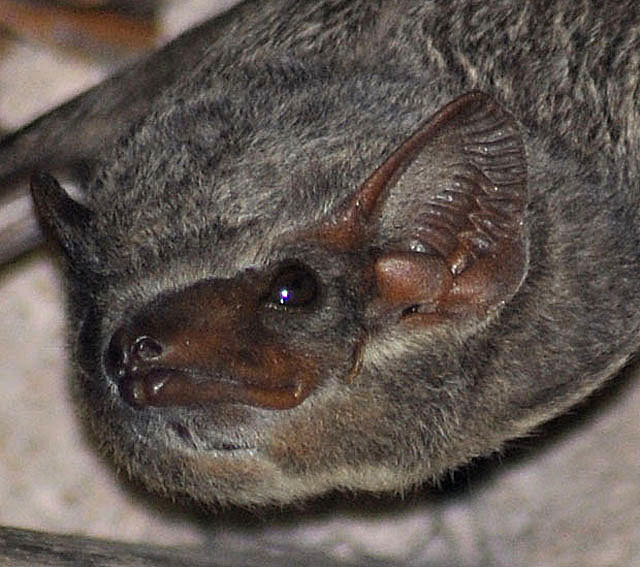 Blind! No, the opposite

Why it’s called a tomb bat, I cannot imagine, other than, it was first discovered by the modern world in 1818 in a tomb in Mauritius and subsequently documented as such. Bats have a bad name and more’s the pity, as they do a lot of good and like any creature, will become a pest if uncontrolled, like elephants, that destroy the bat’s food chain. First, you destroy the trees, which destroy the fruit that destroy the insects that destroy the birds… You get the picture.

This species is known as Taphozous mauritianus and is a member of the sac-winged bats because of the scent gland located on the leading edge of the wings. Its distribution is most tropical and subtropical regions of sub-Saharan Africa. This includes many of the offshore islands, like Mauritius, Seychelles, Madagascar and even some parts of the Sahara itself, but excludes large parts of the East Coast, Namibia, Botswana and mid South Africa.

So why am I doing an article on bats? Well, I was telling the story of a strange and unusual experience I had one very dark summer’s night. The listeners suggested it would make good reading on Wildmoz, so here goes.

We were lying in bed – that is my wife and I – one very dark, moonless, bushveld night and no visible lights anywhere – the way we like it, natural light. It was hot and muggy, so I was lying on my back, very still, conserving energy and trying to cool down, sheets pulled up to below my naval, staring into the blackness, reaching five meters above me to the thatch roof. I was thoughtfully reflecting on a successful day of painting for my latest book, when suddenly, out of nowhere something really large landed right over my belly button, with a hefty thud, reaching across me from side to side!

I shot forward, grabbing hold of the sheet and wrapped that thing up better than a sandwich wrapper. While I was doing this, I asked Cari, “Bring me a towel and don’t switch on the light.” Having sat bolt upright, I was still wrapping my new late-night delivery using all the top sheet I could muster. 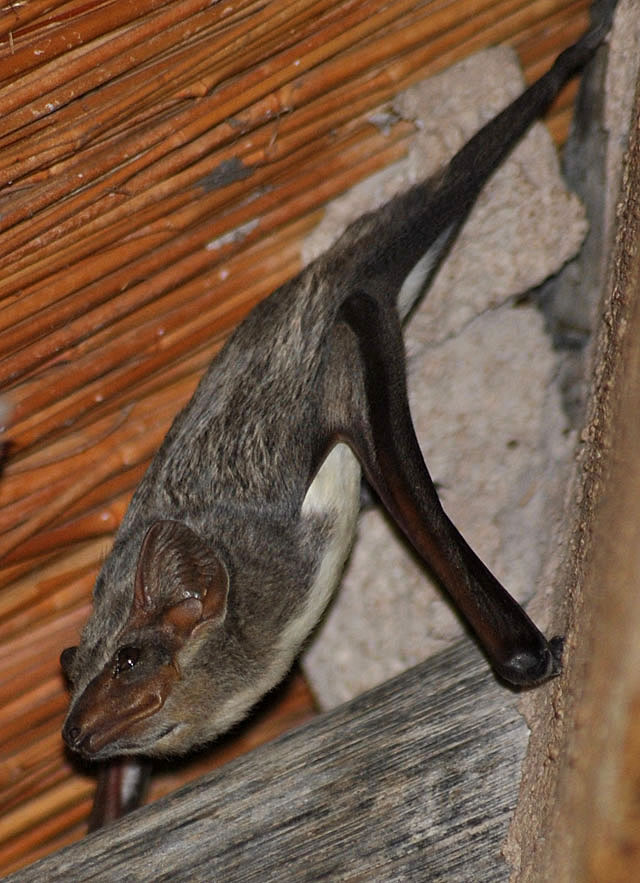 Groping in the dark for the towel on the duvet rail at the end of the bed, Cari shouted, “What happened?”

“Something from the roof landed on my stomach. I don’t know what, but from the weight and size, it feels like a snake or large toad.”

She handed me the towel and I began rendering our gatecrasher as bite-proof as possible for its journey back into the outside world. After wrapping the towel around the sheet, I headed naked for the stoep – porch – following Cari, who had the torch. She switched on the stoep light and I proceeded to unwrap our frightened or angry friend. Whatever it was, we were about to find out.

You see, I’ve got one super-king-size top sheet and one full bath sheet over that, with our night visitor there, somewhere in the middle of it all… I hope. So, without getting jumped upon or bitten by a black mamba, the unwrapping begins – notice how the mind picks the most dangerous option you can think of. Which way is this “thing” going to go and where is it?

Feeling through the folds of material, the exit route is being carefully negotiated in the direction of the outdoor coffee table and might I add, with great deft and finesse. Remember, I’m still buck naked in the open bushveld air. Suddenly, plop! There it was, a large bat with wings reaching over half the size of the table’s width. No, it’s not a small coffee table. Anyway, the bat crawled over the length of the table and flopped off the end, to scuttle over the floor tiles towards a support pillar and hiding behind it, out of the light. And, this is the way we last saw it.

The bat’s behavior suggested a sick or starving adult, alternatively a baby, not quite developed. Reflecting on the first problem, I washed my abdomen and hands with 3% – 10 vol – hydrogen peroxide, in case the little critter had rabies – TIA.

We have thought much about that night, like how or why it got itself inside, as well as the bat’s crawling action, which suggested it was most probably a tomb bat. They are the only bat that uses a crawling action to eat or hide around tree trunks, where they mostly nestle in the daytime.

Then the other day, I was walking past the outside of our bedroom window and a movement caught my eye in the eaves of the thatch. There, huddled up as you see in the photos, was a Mauritian tomb bat peering down at me. I could not wait to document this beauty for Wildmoz and so, now you have it. 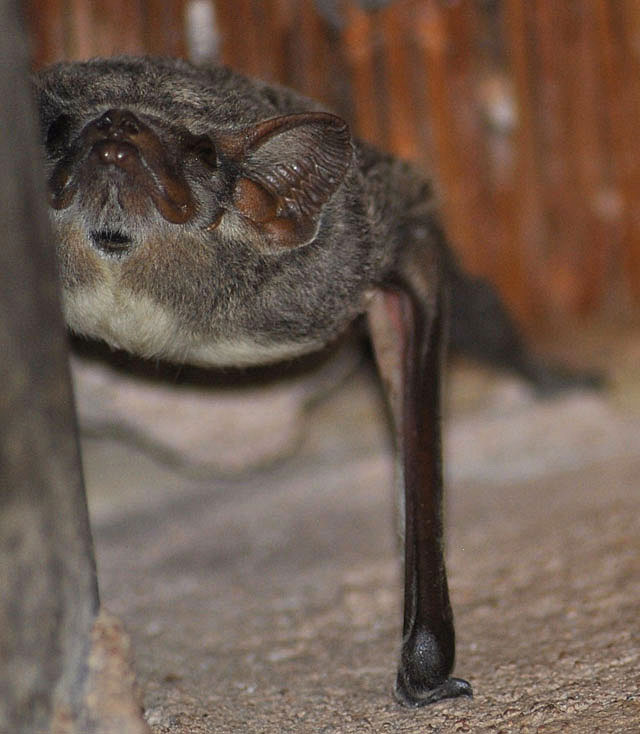 This discovery confirmed our suspicions of the type of bat we had released. Was this possibly the same bat that landed on me, come back to live? He/she has now made its home here, for which we’re happy, knowing how many bad bugs this bat consumes – from moths to termites. For the termites, it crawls around after them, foraging at night. With this bat’s amazing ability to forage vertically, you can be sure termites are kept out of your roof.

These bats have exceptional eyesight and very fast reactions, only common to old-world bats. If you come across one on a tree stem, it will quickly shuffle around to the opposite side of the tree when it knows it’s been spotted, and they do like shelter from rain. These bats are always alert and even hunt butterflies from their roosts during the day. They are not known to do damage to fruit crops, but in fact the opposite, keeping the orchard pests to a minimum.

I have found our friend fairly far down the wall from where I have photographed it, only to see it scramble off, back up to its spot when it sees me. Our bat does not show signs of being afraid, but rather I would say, cautious.

Many insects possess the ability to detect bat echo sounds and dive out of their way, but this bat has a unique ability to change frequencies from below 20 hertz to above 25 hertz, giving it a keen advantage over other bat compatriots. Further, the 25 hertz range enables them to hunt in confined spaces, like dense bush or tree country.

This is a seriously advanced bat and we are very pleased to have it/them live around us.