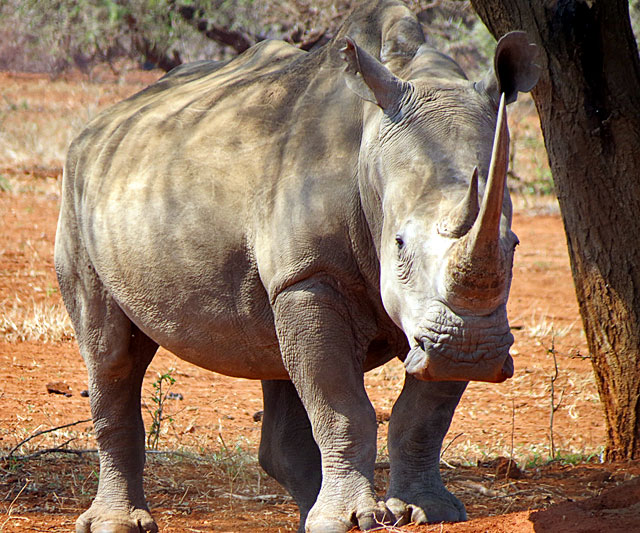 How History Tells the Story

“Just how long can a rhino’s horn get?”

This recent question from a would-be conservationist had us scratching our heads.

Most rhinos today don’t have the luxury of reaching old-age. In an effort to protect them from poacher’s guns, rhino horns are removed or, in the case of the many unfortunate ones, the animal is killed before anyone will ever know!

Sadly, I remember early rhino captures in Zululand that included many animals with luxuriously long horns. One in particular, with an exceptionally long horn, had me joking that before I turned sixty, this rhino could set a record. Obviously, that never happened.

Not far from the Harare Lion Park lies Lake Chievero, where part of this story took  place (see below). Certain details have been left out for the rhino’s safety. On this day, more than one rhino was moved, although this is the one I chose as an example. 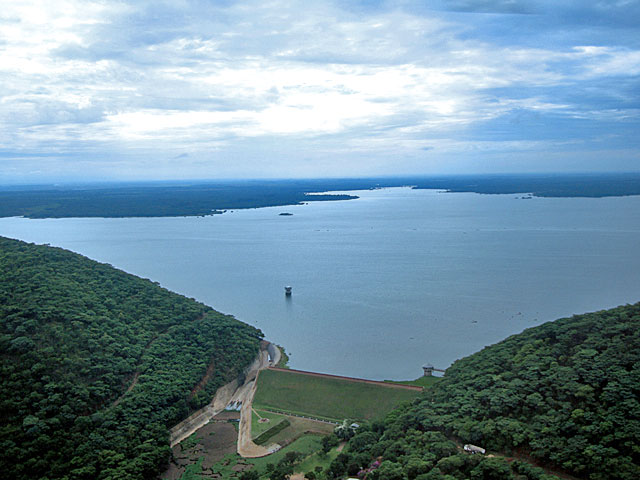 For a record of long horns we’ll have to go all the way back to 1875, when the horns shown (below) were originally collected, to answer that question. These two hard to believe examples are in a private collection in London. The longer specimen, – 62.5 in – over 1.5 mtrs – came from a rhino cow, while the shorter horn, – 52.5 in – over 1.3 mtrs – was from a bull. Both horns have a circumference of about 30 inches or 76 cm at their base. Rhino cows generally have bigger horns than bulls. This proves the old records were correct, in stating the common length of rhino horns was around four feet plus in length, or around the height of a barbed wire fence. 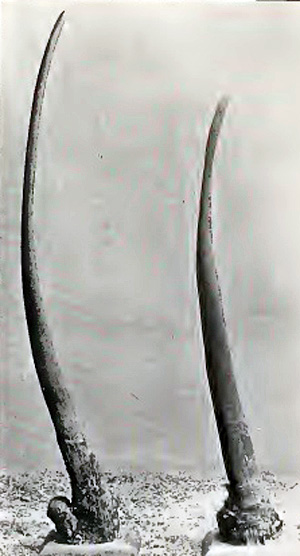 A pair of rhino horns as they were

Today how life has changed

The uniqueness of their horns are the cause of the vicious attacks rhino face today. A rhino horn is made up of keratin – same stuff as hair and fingernails. But saddest of all, thought to be an aphrodisiac in traditional Chinese medicine. The horns are also highly desirable as dagger handles – amoung other artifacts – in parts of the Middle East. Unscrupulous traders pay vast sums for any rhino horn and fund the execution of thousands of Africa’s living treasures.

The White Rhino is the second largest land mammal – after the elephant – and can weigh up to 3,000 kg. They’re herbivores, specialized in grazing, with an exceptionally thick skin also mainly made of collagen.

Between habitat loss and illegal poaching, most Rhino species have been driven to the brink of extinction. Sadly, the Northern white rhino has only three, heavily guarded individuals left in the wild. The African Black rhino is critically endangered along with the three rhino species that occur in Asia; the Sumatran, Javan and Indian Rhino. 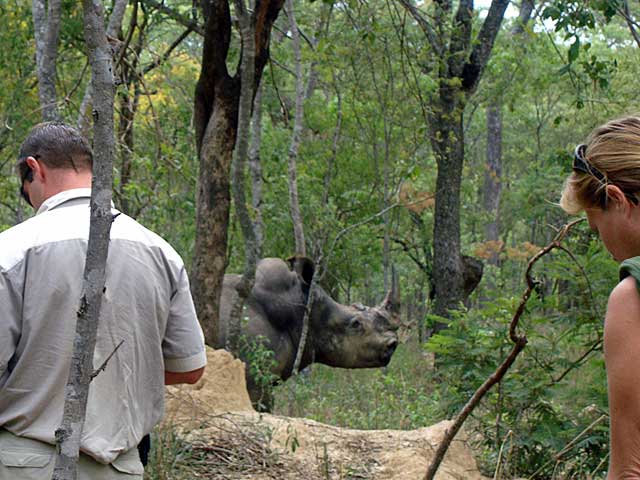 Using their helicopter, AWMC dart the rhinos needing translocation. This image is of the Rhino after it has been darted. On either side of the photo; Josh – capture operator – and his wife, Jacs – wildlife vet – busy getting things ready. 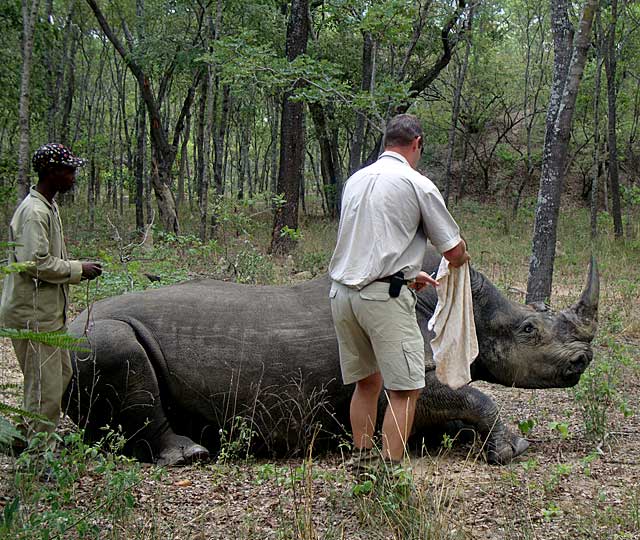 A little more than skill is needed. 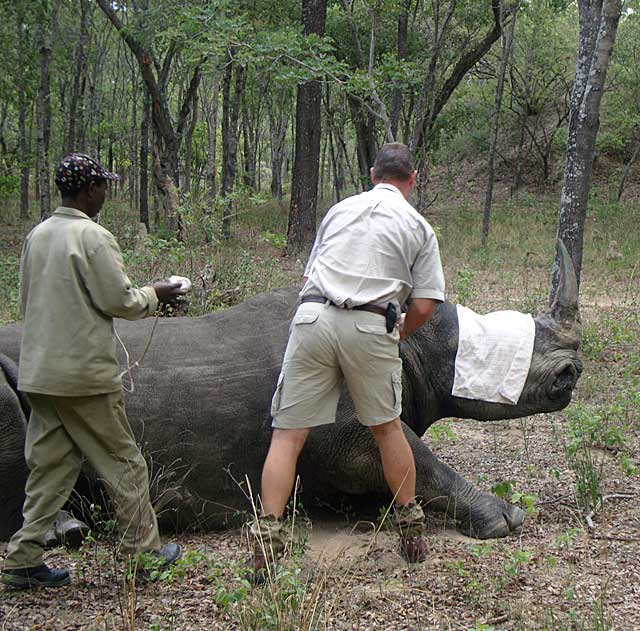 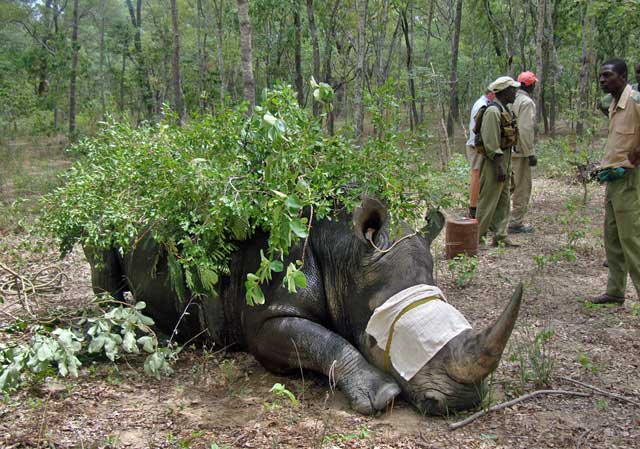 Branches and water spray for vital cooling down. 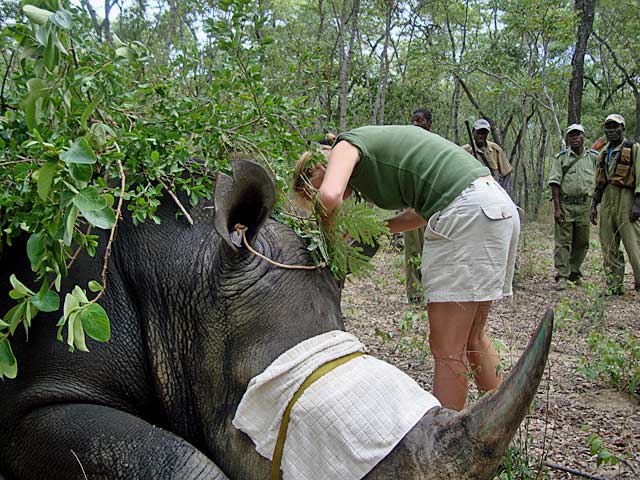 Jacs, the vet, is administering a partial antidote. 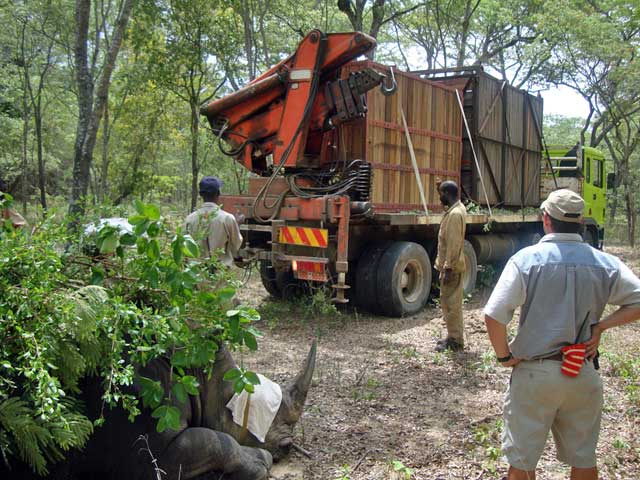 Rhino ride. NJ, one of the bosses – and helicopter pilot – overseeing operations. 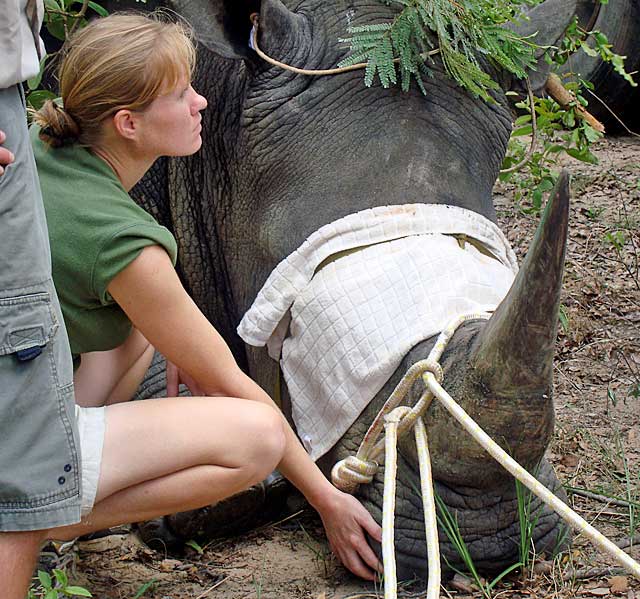 Jacs, is monitoring the respiration. 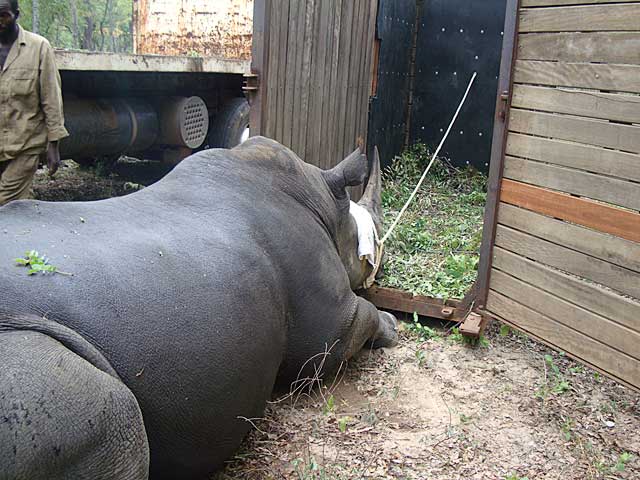 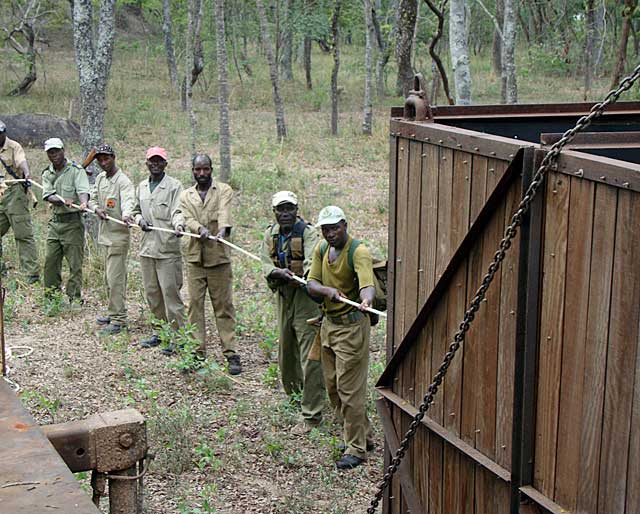 And the tug-of-war is ready to begin. The rope is used mainly as a guide and a means of general safety. 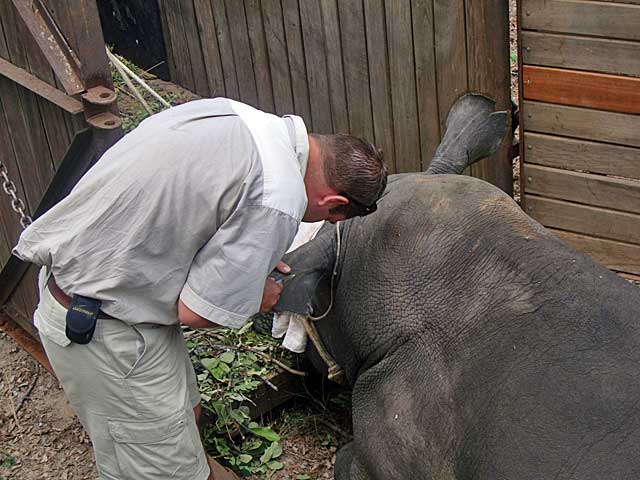 Josh administers a partial revival injection to get the rhino onto its feet. Now you watch out. 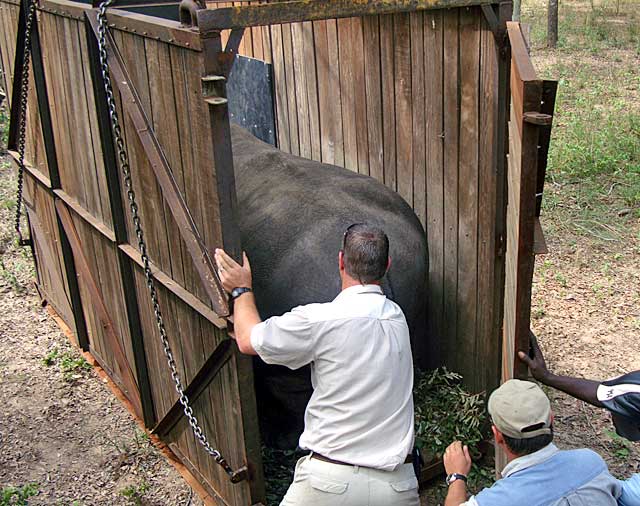 Job done with a little pressure in the rear. 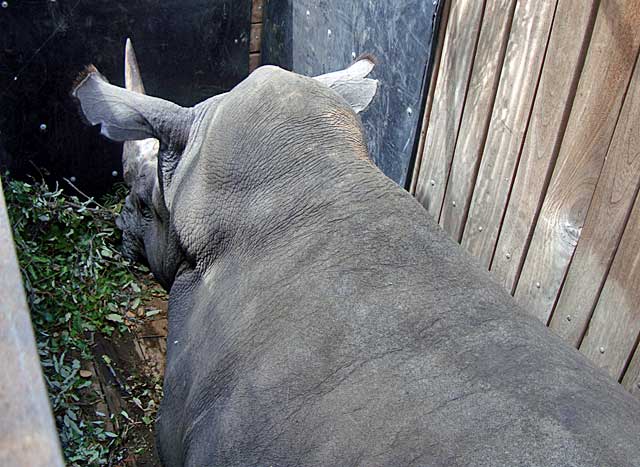 Ropes removed and all’s ready for lift off. 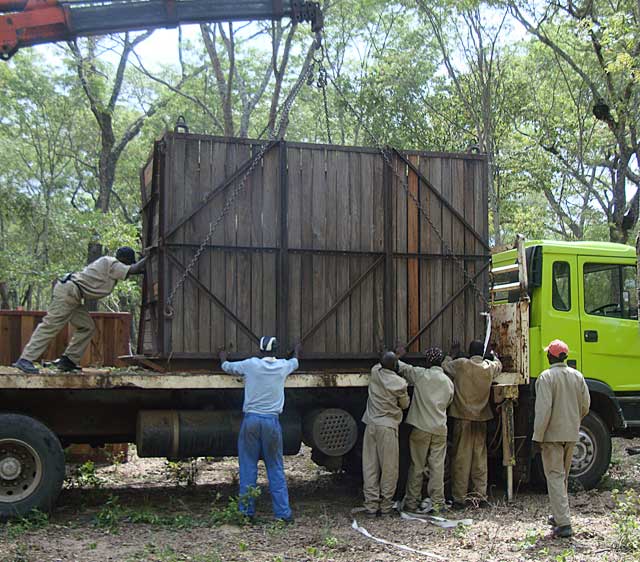 All aboard that’s going aboard. 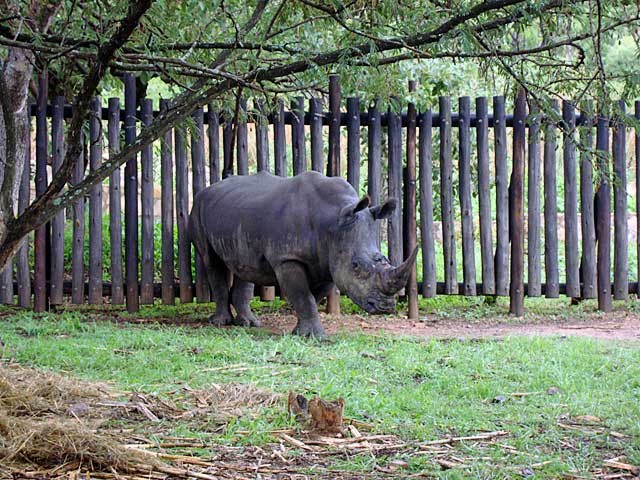 Rhino in its waiting boma.

Home, but first, the obligatory quarantine and adjustment boma and then the release into the wild again. And another rhino is mercifully saved.