Snakes! Wall and All 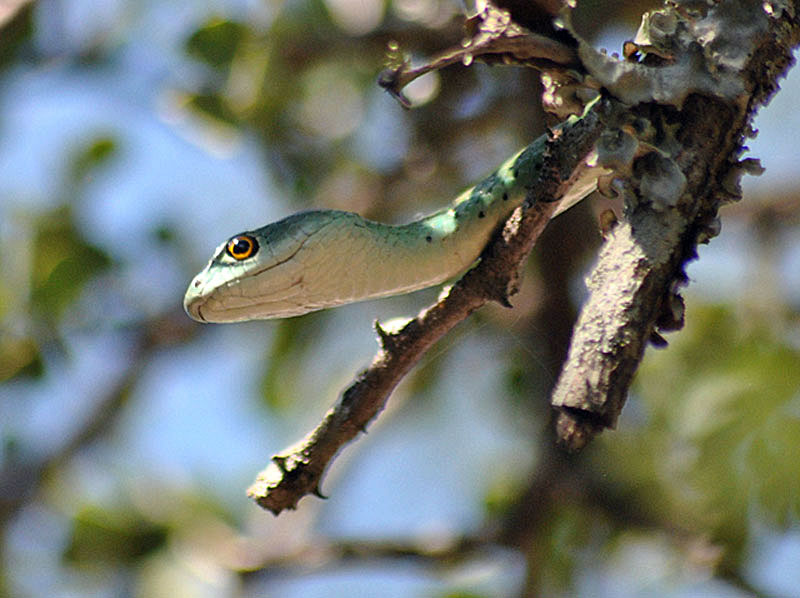 All snakes do it

Except for large snakes like pythons and anacondas, snakes will climb any surface they can get half a grip on. Like the smallest ledge, outward jutting cement, nails, mesh or cord and they love climbing up cords, like a private jungle-gym – try telephone cables.

The most unlikely climbers are the adder family but if they need to climb, they can and will, even up the wall after food, if they can get a grip.

The most likely candidates are our tree snake types and in this category is the boomslang, this spotted bush snake – measuring around 1,2 meters (4 foot) – will always take advantage of buildings with open brick work – not the correct style for the bushveld and coming up, you will see why.

Laid before you are the antics of an African spotted bush snake looking for food. Food consists of lizards, bats, geckos and tree frogs, all of which are here in abundance. 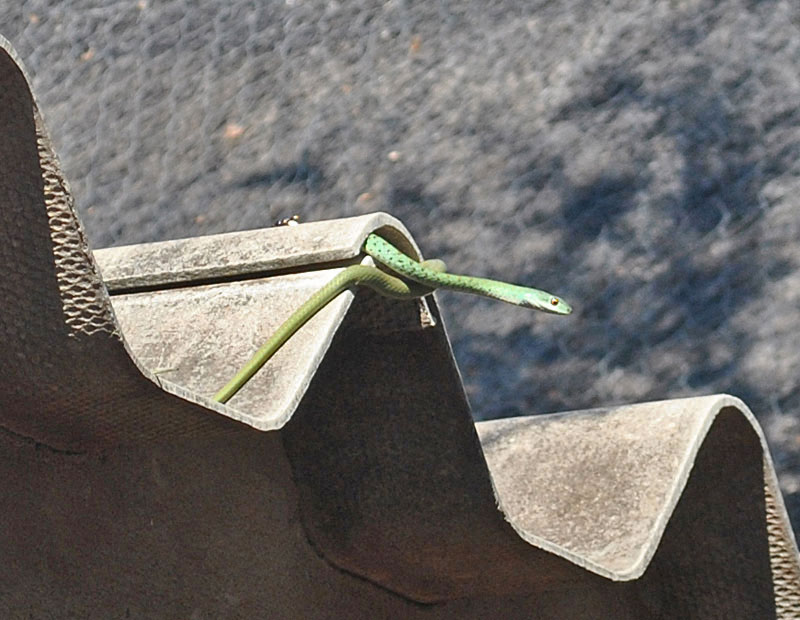 ‘Hello. Snacks for the snake, anyone?’

Our spotted bush snake – Philothamnus semivariegatus – is quite odd, in that it looks like a green mamba or boomslang – in its green stage – to the layman. Although family, this snake is a constrictor, while the other two are back-fanged snakes. Our constrictor has an upper and lower jaw fully decked with fine, needle-like, non-venomous teeth, common to constrictors.

Excuse the quality of the images; I was photographing through a window from inside the building, in order to get the snake’s full action undisturbed. Further on, I end up outside for better quality shots and on equal footing with our friend, who promptly left the scene for better pastures. 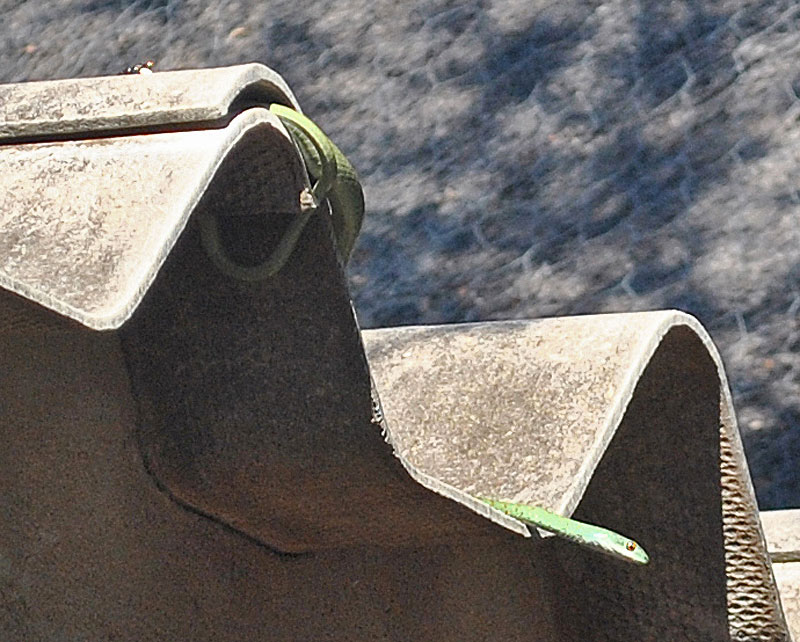 ‘Even a little snack?’

This very common but elusive African snake occurs from South Africa as far north as the Sudan and Uganda and west to east, from Guinea to Tanzania. 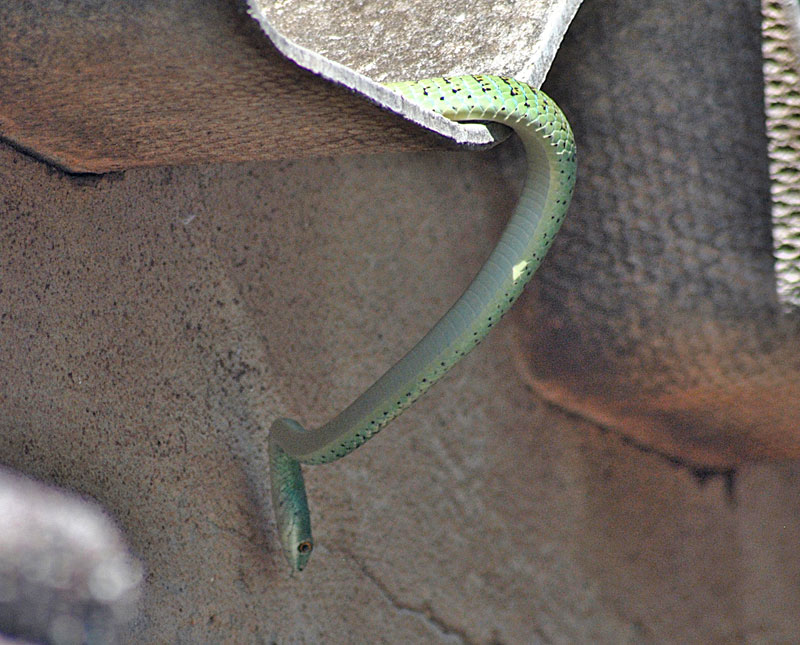 These very fast and handsome snakes are bright green with black flecks, shy and mostly found in forested bush areas. 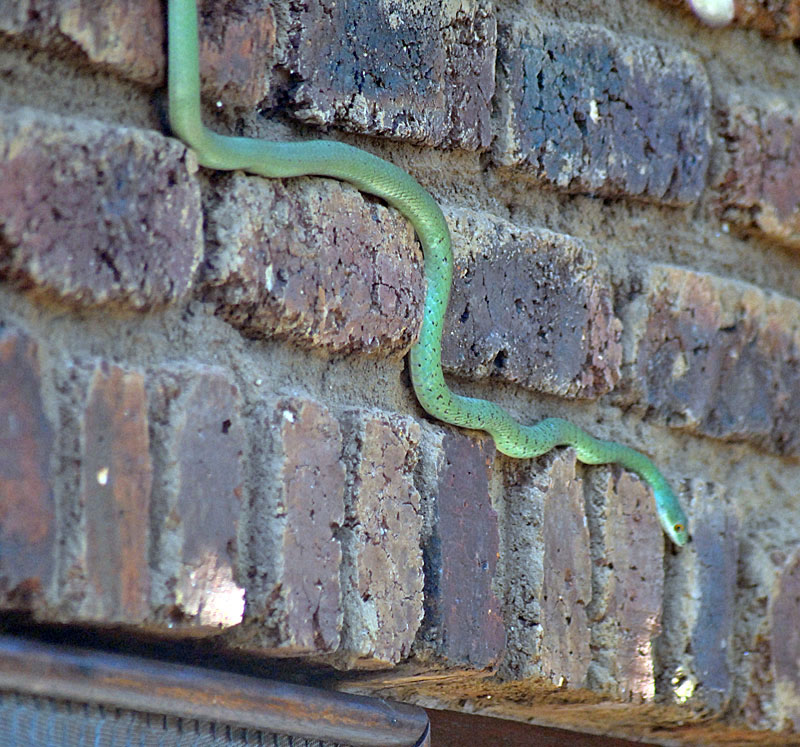 ‘Good brickie you had.’

This photographer was trying not to be spotted by our slithery visitor, as it enjoyed the cunning patterns of the plentiful brickwork. 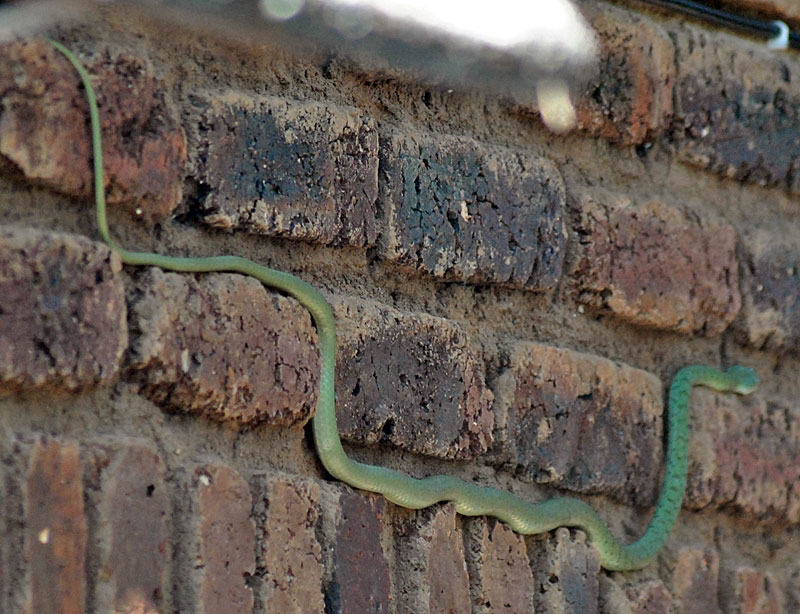 Well camouflaged, – not so much on a brick wall – spotted bush snakes will roam great distances looking for food and this one seems well versed with some convenient brickwork. 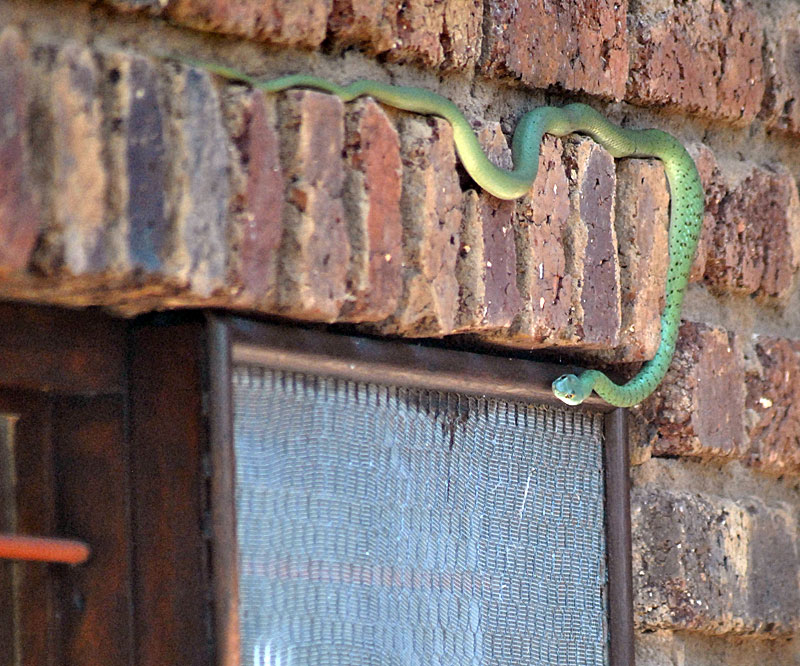 Spotted bush snakes are not territorial and are completely harmless, as long as you stay away from their tiny, sharp, saw-like teeth – nips will draw blood and they are not reluctant to bite! I saw someone get bitten on the forearm once. The snake shook itself vigorously to sink its teeth well into the skin. Some hydrogen peroxide sorted that one easily. 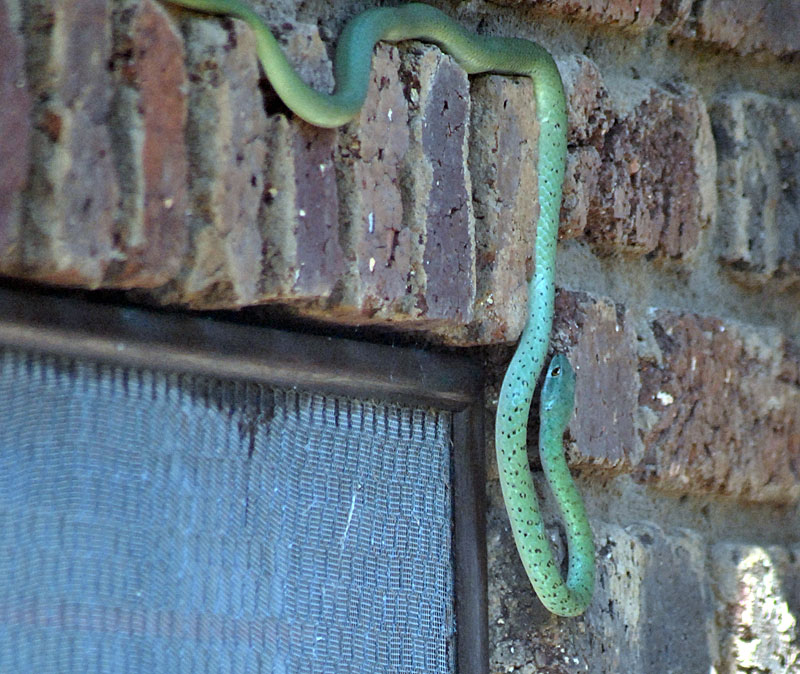 ‘Screens, nothing but stupid screens!’

Spotted bush snakes are highly alert with excellent eyesight and as these images show, they’re outstanding climbers and swimmers, – demos will not be arranged.

Now for some silly snake quotes.

“The presence of snakes has a good side, – all small critters leave the building.”   –   Anon. 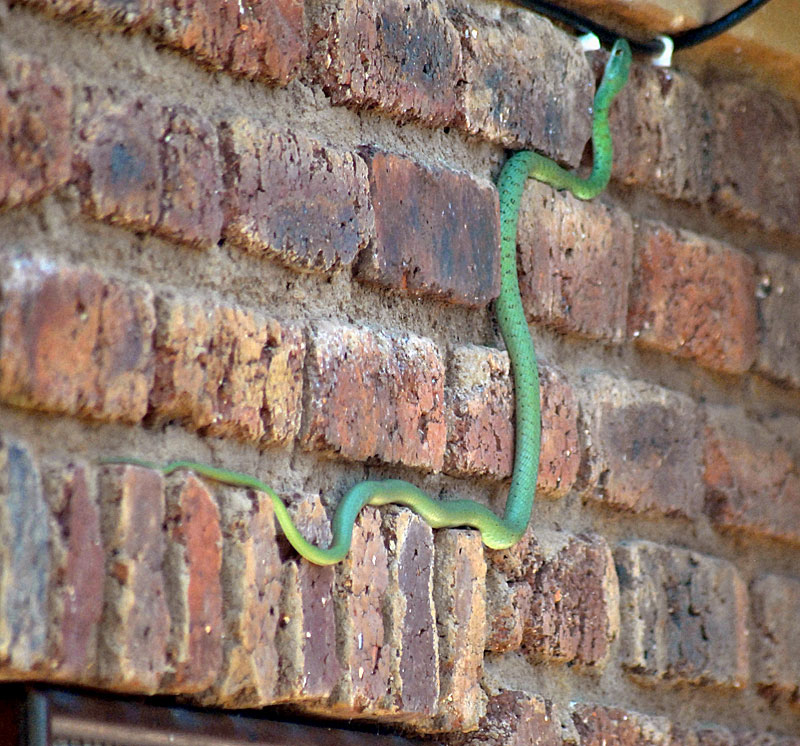 Quote: “Four snakes gliding up and down a hollow for no purpose that I could see – not to eat, not for love, but only for gliding.”   –   Ralph Waldo Emerson 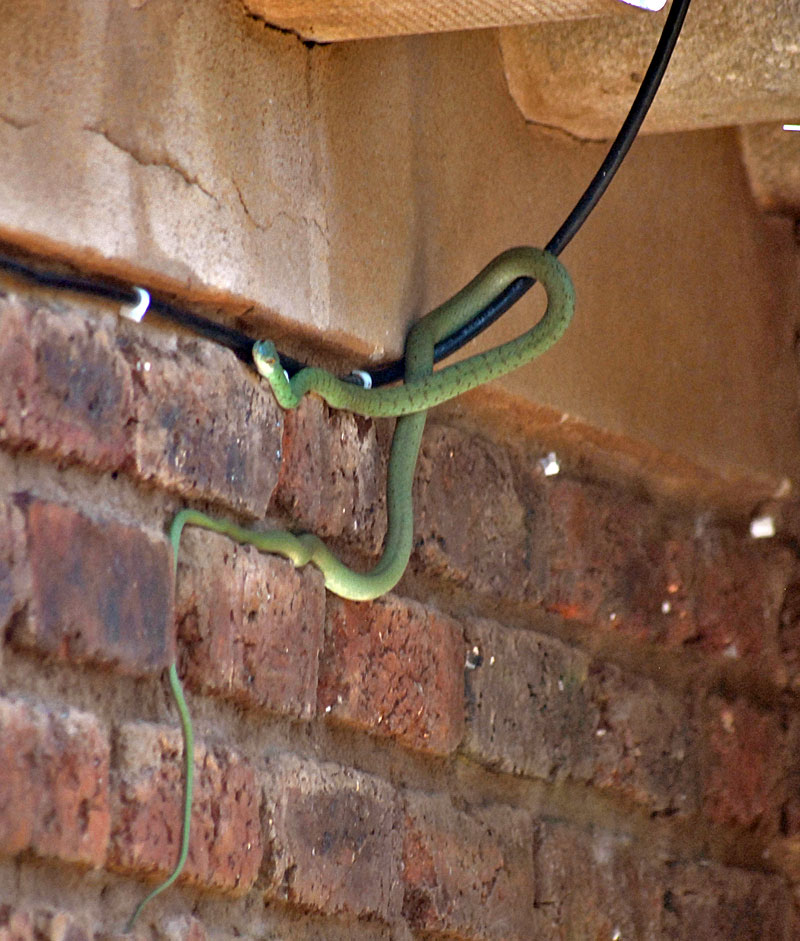 ‘Hang on snake, you missed something. Go back.’ 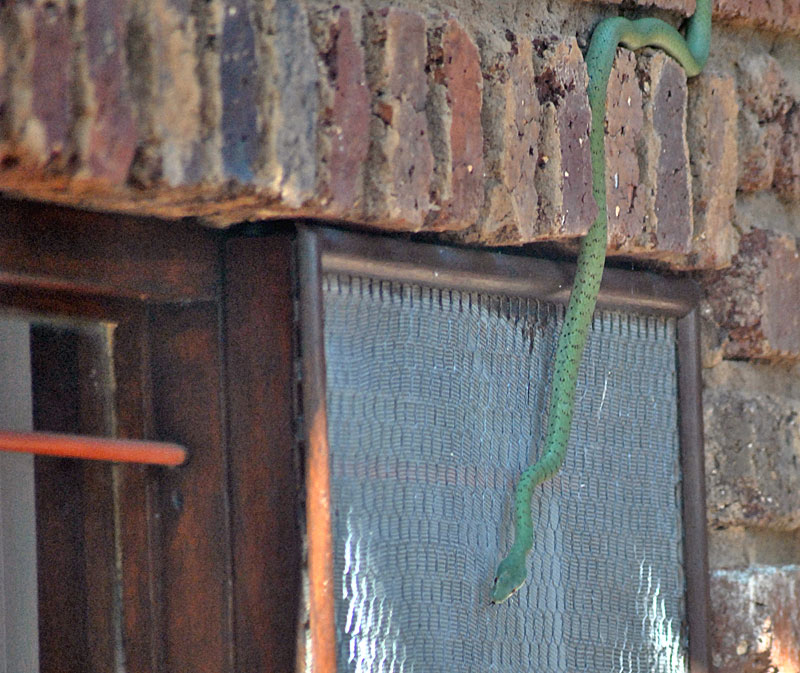 ‘Go beyond the screens.’

Quote: “Even snakes are afraid of snakes.”   –   Steven Wright 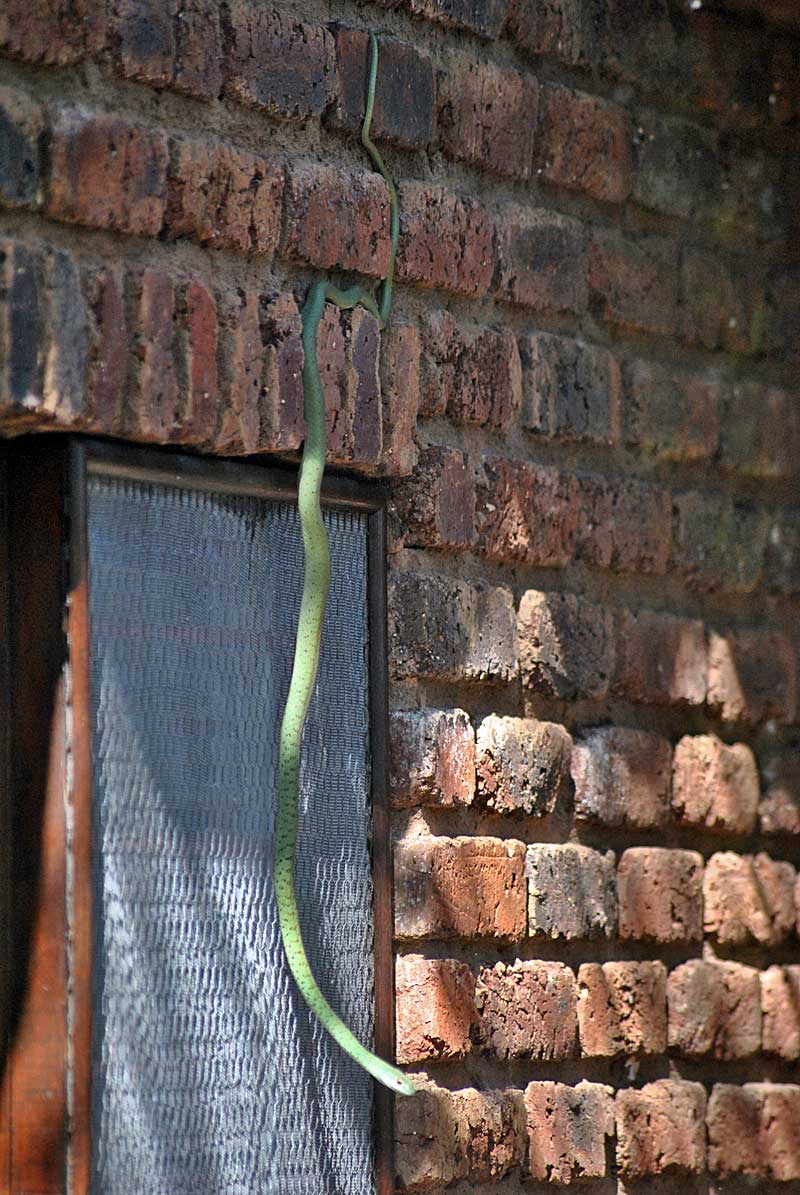 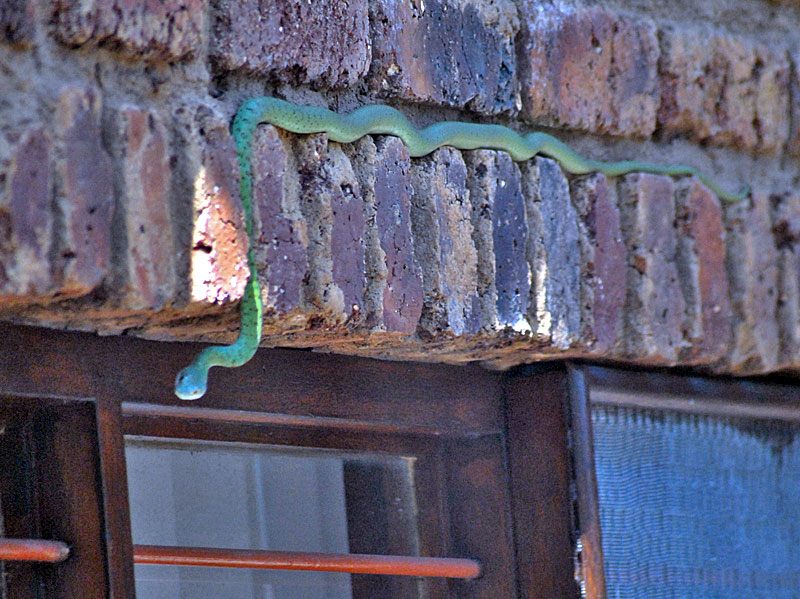 Quote: “Even if a snake is not poisonous, it should pretend to be venomous.”   –   Chanakya 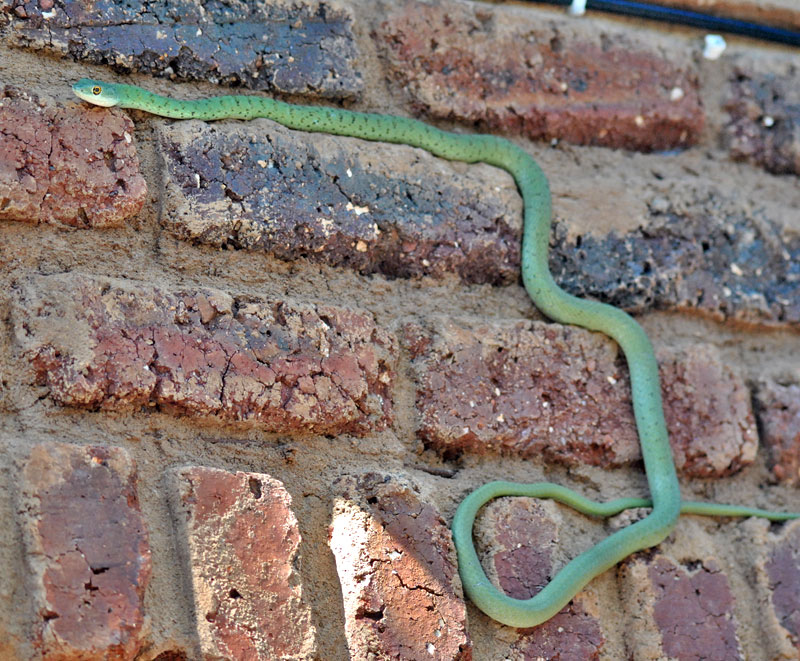 Now I’m on equal footing, having gone outside to continue photographing our spotted bush snake from close-up. While it gets itself into knots. 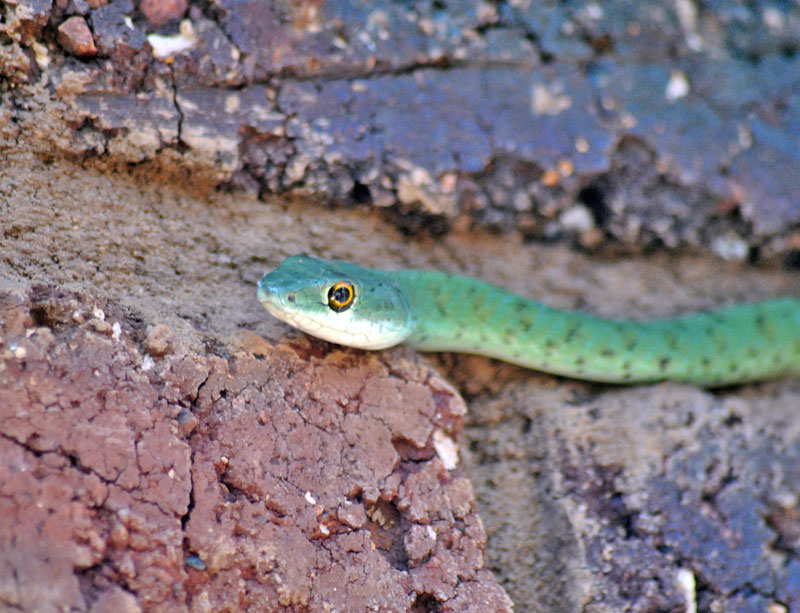 These snakes are supposed to be naturally nervous, and quick to flee from perceived danger; our snake was mostly just irritated to be interrupted in its important work. Obviously not enjoying its fifteen minutes of fame! 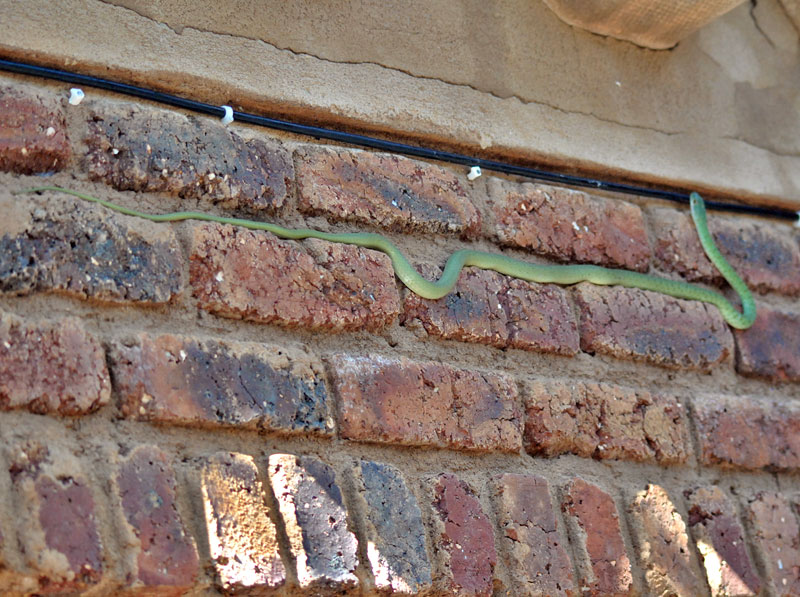 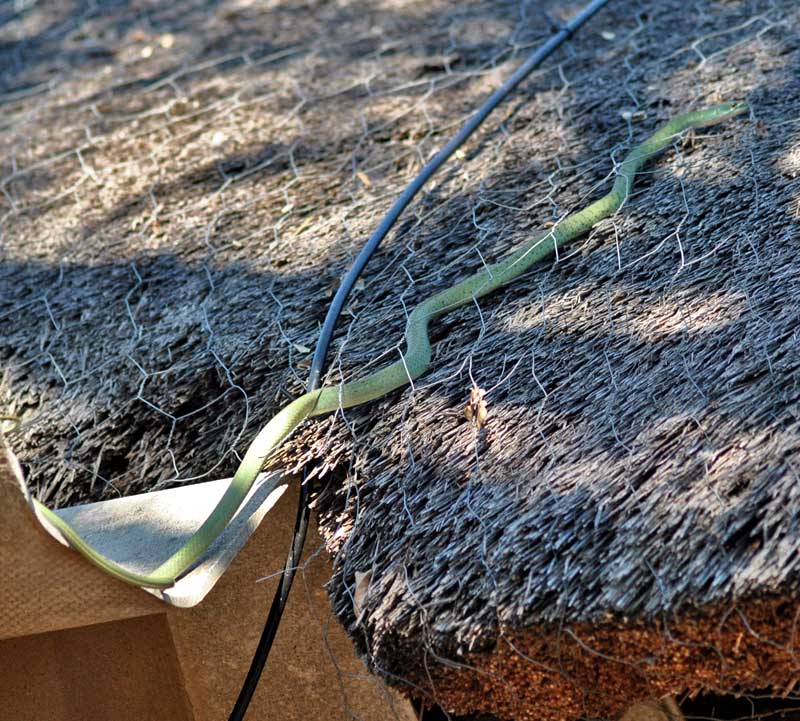 ‘No time for a photo shoot. I’m hungry.’

Snakes are naturally camera shy. Maybe it’s the big eye they don’t like. To them, big eyes mean big teeth. It may be interesting to note, that spitting snakes like cobras, aim for the eyes or camera lens when they spit. 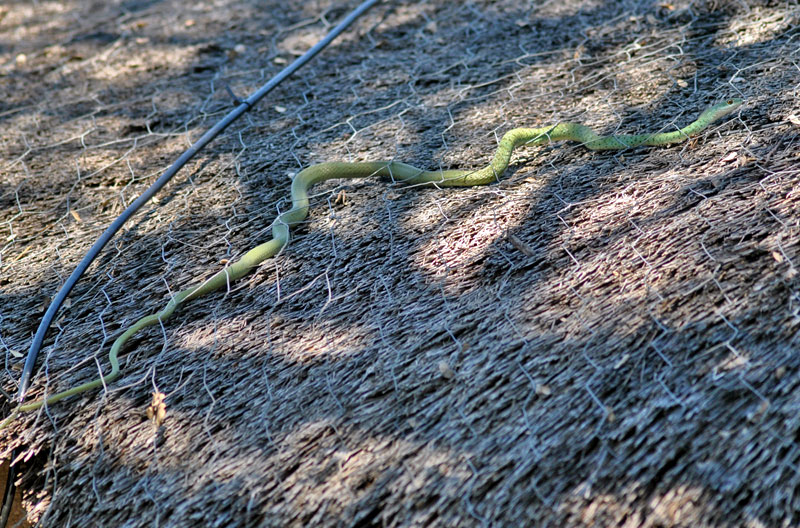 Where’s a snake going to find a juicy lizard, with this paparazzo hanging around? 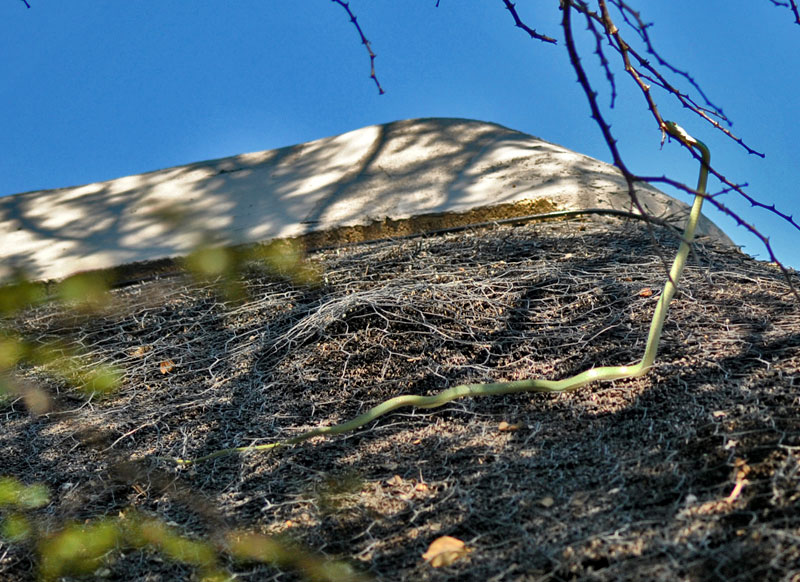 ‘Step-ups are for sissies.’ 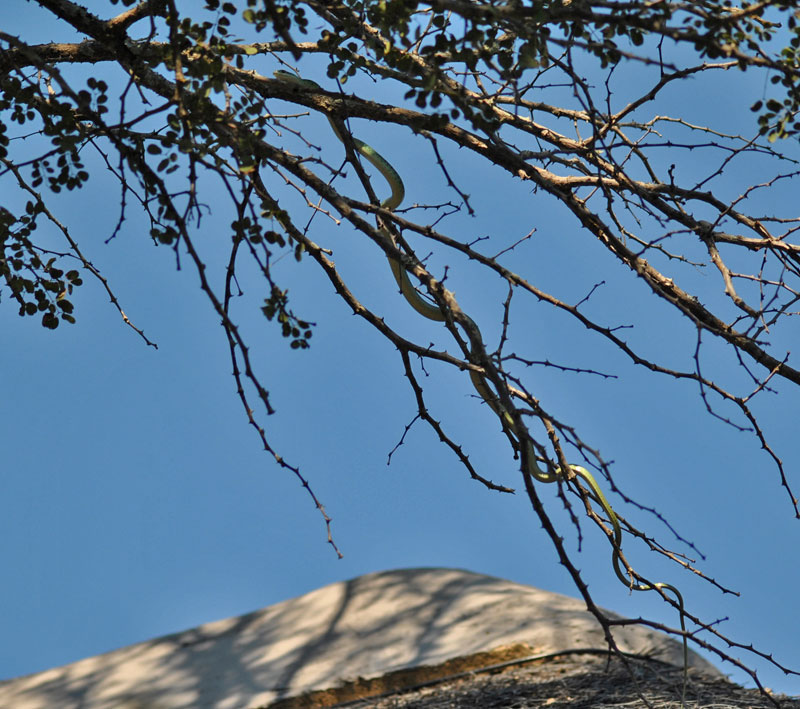 ‘Thorns? What thorns? Oh, they’re here to keep away the paparazzi.’

Quote: “The snakes have their place in the agricultural economy of the village, but our villagers do not seem to realize it.”   –   Mahatma Gandhi 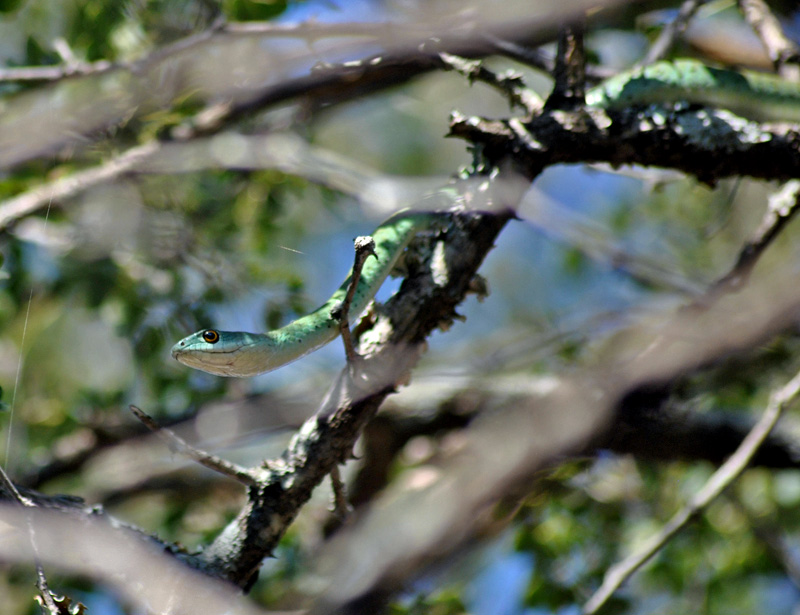 ‘Sayonara. I’m leaving you and your camera for good. You can keep your critters’

Hope you enjoyed the antics of our spotted bush snake. You are unlikely to find these guys in your local snake park, because of the difficulty in raising them in captivity.