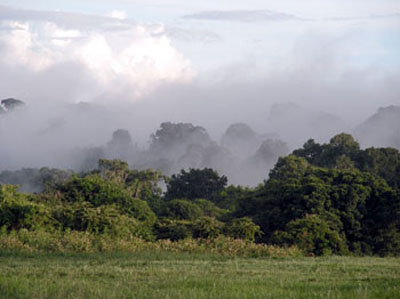 For the remainder of February and into March, communication resumed with the normal flow of emails back and forth. Use of the phone had stopped until such time as our bill had recovered from Josh’s Malaria.

So when I answered a call towards the middle of March and heard him on the line, my heart gave an immediate lurch! What followed added at least a hundred gray hairs and ten years to my age!

“We’re fine. What’s wrong?” (No beating about the bush now!)

“I’m at the hospital in Xaqrebaiokejzrozro.” (Well, that’s what it sounded like! Arghhhhh, HOSPITAL!)

“Well remember that bite I told you about?” (Last e-mail asked about treating what appeared to be a spider bite on his lower leg)

“Yeah, yeah.” (Now I’m starting to relax… it probably got infected. That was the wrong approach)

“Well, the glands in my groin are huge and it (the bite) went black in the middle so I came here to the Outpatients.” (African version of Accident and Emergency – in case you ever need to know!)

“Good thing, what do they say?”

“The What, Why?” (Here go the alarm bells again)

“They want to take a scraping”

“Why?” (I’m mentally packing and calculating the airfare!)

“They say its Anthrax.”

“WHAT??? Impossible, Josh that’s a Bush Hospital, how do they know?” (I’m waaay too old for this… I keep forgetting to breathe!)

“How can you be OK? Anthrax is deadly!” (All I know about Anthrax, – from the bush; burn all the carcasses and from CNN; death in envelopes!)

“No, they’ve given me the shots already. They say I’ll be fine. Bloody sore shots though.” (At leased not bloody dead, I thought)

In Africa you survive in spite of, not because of.

The officials came and scraped, and took the samples off for the tests. That was nearly five weeks ago and Josh still hasn’t had a chance to drive the tortuously long road back to the government hospital to pick up the results. He feels fine, completing the course of medicines that was given along with the injections. In his case, I think it helps being married to a wildlife vet trained in Africa.

Once again, he was back, grafting away within a few days and off to the bush to work with his beloved animals. He’s also busy developing and testing a harmless elephant repellent for EU sponsored conservationists. When I spoke to him this morning, he told me that the wound has shrunk to the size of a one-pound coin (about the size of a quarter) and is healing nicely. I wish I could say the same for myself!

Anthrax was even discovered in a cow in Texas in 1981. Obviously my knowledge about Anthrax needed upgrading! Every reference I had heard relating to it, focused on the use of Anthrax as a biological weapon. Boy, did I have a lot to learn! The CDC (Center for Disease Control – USA) provided me with the most concise (and comforting) information.

1) There are actually three types of Anthrax infection:  a. cutaneous (skin), b. inhalation and c. gastrointestinal.

2) All types are caused by the spore-forming bacterium Bacillus anthracis that occurs usually in lower vertebrates such as cattle, goats, sheep, camels, antelopes, etc.

3) It can occur in humans when they are exposed to infected animals, tissue from infected animals or when the spores are used as a bio-terrorist weapon (by some crazy people).

Josh had been infected with the cutaneous (most common) version, which accounts for about 95% of Anthrax infections. The bacterium enters the body through a cut or abrasion on the skin, when handling infected animals or their by-products such as hair or hides. This forms an itchy, raised bump resembling an insect bite that in a couple of days forms a painless ulcer with a characteristic black necrotic (dying) area in the center. Lymph glands in the vicinity of the ulcer may swell.

Deaths are rare with modern treatments; about 20% of untreated cases result in fatalities unlike the gastrointestinal type (25% -60% fatalities for both treated and untreated) and the Inhalation type, which is almost always fatal, so I didn’t panic for nothing.

When they next meet, father and son will have plenty to share comparing notes. We never thought that Josh would be facing some of these small dangers quite so soon; Moz thinks it’s horribly unfair that ailments he endured, spread over some twenty-five years, Josh has faced in a matter of months. He says he gave Josh a warning not a prophecy.

He’s always considered nature to be more fair to its protectors. One consolation is, we’re just hoping and praying that Josh has had his share for a while!

Ahh, Africa, place of mystery and romance; an exotic, wild destination where travelers come for adventure.

It’s a wonder that the continent ever got explored. Had early pioneers realized that the same malaria that plagued Venice, Italy and the Everglades in Florida was also here, they might have thought twice about coming in the first place.

And Anthrax, Anthrax is everywhere, not any more impressive if acquired in an exotic location, although that’s the most likely place you’ll get it.