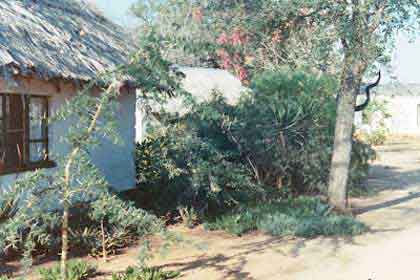 A Bungalow in the Camp at Timbavati

Timbavati. Wood hoopoe’s in the tree outside my window cackled and chuckled at each other. Their chatter made sleep impossible, as did smells of camp coffee drifting down from the *boma, on the warm morning air. The sleeping camp was waking up as the vocal bush greetings intensified. We gathered, rumpled, from bed and bungalow, and collected in the boma to wait for breakfast and the rising sun.

On a warm Timbavati summers morning, the topic dominating breakfast centered on meat for the camp. Tomorrow was the end of three glorious weeks in the Lowveld; one hundred miles (160km) from the nearest useful town – Nelspruit. A long journey on mostly graded dirt roads but first down rutted two-tracks, across river beds where wild animals vastly outnumbered humans.

For the staff and the guides staying behind, our departure signaled the start for them preparing the camp for the coming visitors. The meat was almost finished and no one had yet bagged anything, although not for a lack of trying. One large animal, preferably a wildebeest or two impala would be sufficient for the month, for all those remaining. Now the need had become urgent, considering we only had today to make a kill. What was needed was a volunteer to go out, find a suitable candidate and shoot it. After skinning and preparing the meat, the best would be made into biltong (similar to jerky). The remainder would be divided with some being frozen and the other precooked to be stored in the paraffin deep freeze.

Two men set off on foot after breakfast to shoot for the pot; Monty, armed with a borrowed .375 Holland and Holland Magnum rifle, and Santros a Shangaan, born and raised in the bush, was the guide and tracker, with his regulation knife and axe. By lunchtime, they were back, empty-handed. This may partly have been due to Monty’s unfamiliarity with Timbavati. Out of several opportunities, none had panned out and after lunch they set off again. Once again the game proved elusive and skittish in the thick undergrowth. The afternoon felt dense and damp in the stillness of the heat. Their stalking took them through scrub, dry river beds, Mopane trees, semi-open plains and more think bush, further away from the camp than they intended.

Eventually in the late afternoon Monty struck gold and shot a wildebeest, but in the lengthening shadows it wasn’t a clean shot and the wildebeest was a *runner, making some distance before dropping dead. The men tracked it to where it had fallen and, as custom dictated, covered the body with brush and thorn branches, protecting it from predators like Lion and Hyena, since the afternoon was almost spent. The spot was marked and a path cleared for the Kombi to load the wildebeest, a long way from the nearest two-track. By the time they were finished the sun had set and the Kombi still had to be fetched. 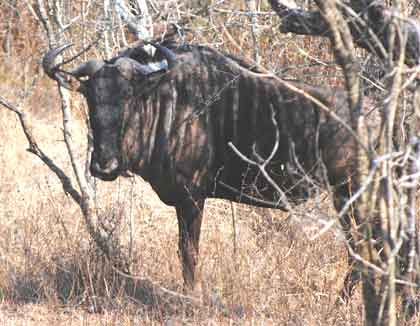 A wildebeest in the winter

Leaving the two track behind them, the men set off back to camp, Monty following Santros as he led the way. In a moonless sky and the last of the sunlight all but gone, Santros adopted a new strategy slipping behind Monty; using him as a shield, while pointing the way. Monty had been relying on Santros to lead them back, but he became suspicious of this sudden change of tactics, because it became apparent, that Santros was not keeping a straight line. Guided mostly by the stars, they reached a two-track game road. Suddenly Monty deliberately circled Santros and asked him, ‘now where to?’ And was pointed straight back into the bush they had just left. Waving his hand in front of Santros, who looked like a frightened buck caught in the headlights. Monty’s suspicions were confirmed. This man could not see a thing! Well now, that left Monty stuck in the middle of danger land with an unkind draw card. It was beginning to get really dark and here he was, stuck with a guide who was *night-blind, somewhere in Timbavati, but where? Monty, remembering the way he had come, decided to return to where the wildebeest lay and there formulate a new plan to secure their position.

A hot day walking through thick bush, tracking moving herds of game, had left both of them smelling a lot more “human” than usual. Naturally, this aroma was sure to be creating advanced advertising. Envisioning close encounters with claws and fangs, Monty tried to persuade Santros (m’Shangaan) in his broken Zulu tongue, which is best known as Fanegalo, that the best plan of action was to climb a large tree, get comfortable and raise the alarm by firing shots into the air. This was lion country; leopard and hyena would not be far behind. Santros was having none of it, flatly refusing to climb into a tree and wait. He insisted on going to get help. Leaving Monty; he went off stumbling and crashing into the Timbavati darkness.

Alone, Monty had little choice but to climb the closest suitable tree and make himself as secure as possible. Still, he was anxious for Santros, how would he cope? It was patently clear he couldn’t even see his hand in front of his face? Monty could only hope that years of experience would help Santros to somehow find his way back.

After settling in on his tree branch and guessing that everyone would at that moment be gathered in the boma for supper, Monty fired into the still night air and waited for an answering shot. No reply, with nothing but a vast, uncompromising stillness… In the five-shot .375 magnum, only three bullets remained. He’d have to make them count or spend a rough night in that tree. Waiting what he estimated to be another hour, he repeated the action with the same result, silence, deathly silence… Things were not looking good. Had he maybe gone too far from camp? The stillness of the night left Monty with many more questions than answers.

With only two bullets remaining, Monty waited yet another estimated hour before trying again, and again the shot was absorbed into the dense blackness. Monty resolved, that was it, his last bullet was for safety’s sake. Just as he was resigning himself to a chilly and uncomfortable night, he heard the dull crack of an answering shot. Surprised how distant the shot sounded, he realized that their stalking and tracking the wounded wildebeest had taken them far, far away from camp. There were still no guarantees that he’d be found before daybreak, but he was secure in the fact that the camp knew he was alive and in what direction he was. Miles had to be covered in the dark to get close enough before the sound of voices would carry intelligibly. Those from the camp would know where to go from the direction of his shot, but he would have to be very careful with his last bullet and at the same time hoping his rescuers would not fire a shot too soon, forcing him to answer. 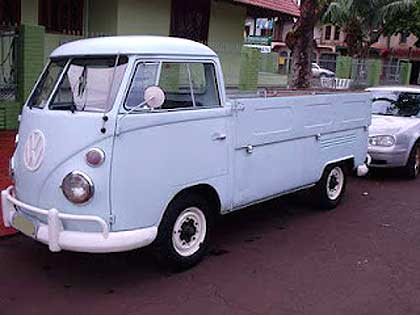 The Salvage of a Simple Task Gone Wrong

With all his senses strung tight, his last shot still ringing in his ears, Monty unable to see, strained to hear this unknown world around him. As time passed, he heard the occasional rustle and snap of animals passing under his tree. In the distance, a herd of wildebeest could be heard grunting and snorting as they shuffled in the night; behind him some lions roared and others answered nearby. Monty thought he was safe in his tree, knowing lions are particularly dangerous at night he reckoned he had climbed high enough. There was no comforting sound of a vehicle approaching and when he scanned the darkness, no glimmer of headlights could be seen through the tree tops in the direction he heard the answering shot.

Looking up into the southern sky, Monty could see the bright band of the Milky Way through the leaves of the trees, but could not make out the southern cross that indicated due south. He had lost track of the time, his watch was useless; it was too dark to see the face. The air started to cool and Monty began to feel drowsy, so as a precaution, he took off his belt and looped it through the trigger guard of the rifle. Passing the end around a smaller branch sticking out of the main branch where he was cradled, he looped it through his pants and made it fast. Satisfied that if he dozed off both he and the rifle would stay in the tree; with the sound of a Scops owl calling nearby he settled down to wait it out.

Monty, dreaming of a steak and a beer in the boma, was jolted out of his slumber by the sound of another shot, now much closer than before. The shock took him by surprise, suddenly realizing he must have dozed off. Unstrapping the rifle, he breached his last bullet and fired into night sky. Still no lights, anxiously he scanned the night for traces of lights and was rewarded with the sight of beams breaking darkness at the skyline and then disappearing downwards again, as a vehicle does navigating rises, falls and riverbanks, along a two-track. Now wide awake, the imminence of freedom really warmed the cockles of his heart.

Shortly, amid commotions of noise and shouting, directions were given and received. Then by the lights of the Kombi, the trackers could follow the guide marks Santros had made (on the trees) leading them to the wildebeest carcass. Monty was discovered in his tree when midnight was well behind him.

In the midst of all the activities, the wide eyed Santros fortunately unharmed, wandered onto the scene, groping around and clearly happy to be in the presence of light. In the light from the lamps, he was even able to help with loading the Wildebeest. When questioned by the others; who were now laughing and plying him with questions, he simply ignored them, not opening his mouth about the ordeal. How he had managed to stay unscathed for over five hours in the wild, blind-as-a-bat and surrounded by predators is still a mystery. Santros, if he went anywhere, must have been guided by Monty’s gun shots.

With the hero’s home, things settled down, the pampered Monty getting his much deserved steak and beer, while Santros went up to his house to eat and rest. With skinning over sometime in the small hours of the morning, everyone eventually got to bed… In the end success, the unfortunate wildebeest providing enough meat for the whole camp, rationed out for nearly five weeks after we left Timbavati!