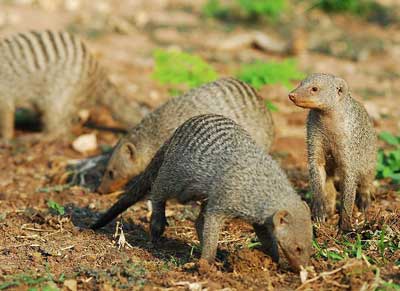 Glory is not the Full Story

Wildlife vets in Africa are mostly associated with heroic maneuvers to rescue endangered rhino or save baby orphaned elephants. But take away the bright lights of international causes and glamorous foundations and the work is often hard, unrecognized slog.

This is a guest post from Jacqueline la Grange-Mostert, AWMC’s traveling wildlife vet. The story of the baby, banded mongooses (stripies) happened in Botswana, one April…

The banded mongoose (Mungos mungo) occurs in central and eastern areas of Africa, living in open forests, grasslands and savannas, using termite mounds and burrows for shelter. Most species of mongoose lead solitary lives, but banded mongoose gather in colonies that include an intricate social system.

New Beginnings for the Abandoned

Here’s the story of one little family of orphans, as told by Jacque…

On Thursday last week, I was called to one of the lodges as there were some abandoned baby stripies, actually the lady said that they’d been crying since Monday.

On arrival, we located five of  the banded mongooses under a wood pile. One was already dead, and the other four were extremely dehydrated, starving, their coats, mouths, ears and noses full of fly eggs. They were completely limp and to say that they looked bleak, is a gross understatement. I bundled them into the cat carrier and took them to the lab, leaving the lady to lift the rest of the wood to see if there were any more.

I got all of the insect eggs off them, warmed some fluid and pumped it under their skin. Putting them on a hot water bottle they were left for a bit, then fed with a syringe. I was really concerned about one as it was just not responding like the others.

Then another was found and this was definitely looking like it wanted to join the Euth-club (euthanasia). Anyway, it was subjected to the same treatment and plonked with the rest.

I was up with them all night, feeding, re-hydrating, massaging, warming… sheesh… just call me mama!  Anyway, they’re all doing splendidly, and they are unbelievably adorable. The photo was taken the day after they arrived, and since then they’ve almost doubled in size. I wish that you could see them in person.

Pronutro and No Sleep Save the Day

I’m estimating that they’re about two and a half weeks old now, and each of them has a very definite personality that is coming through strength five. They have colored dots on their foreheads to tell them apart, so their names follow suit, Orange, Green, Blue, Yellow and Purple. How non-creative of me! :-)

Yesterday they ate their first Pronutro (like baby porridge – fortified and very nutritious) and milk from a bowl (well, maybe eating is too specific a word for what they were doing with the food…feet painting the cage with it is probably more appropriate!). Not much food actually made a successful transition from plate to GIT (gastro-intestinal-tract)…we are getting there though.

For one meal a day, I let them help themselves and we are certainly making progress, albeit very minor… after being in the “porridge” they take on the appearance of abominable snowmen! They are also syringe-fed every 3 hours…throughout the night too.

I struggle to fall asleep again after the very early morning feeds though. So I float through the daylight hours with that happy, surreal, coasting feeling that only insomniacs, druggies and final year students have the privilege of experiencing. :-)

The day’s duties are being methodically completed with the absolute least possible concentration. My meandering mind is unable to settle on anything of much worth for any significant amount of time…

Only one of the original six babies didn’t make it as it was already dead when they were found.  All five of the surviving babies thrived and were released… Another small victory in the life of an African wildlife vet.