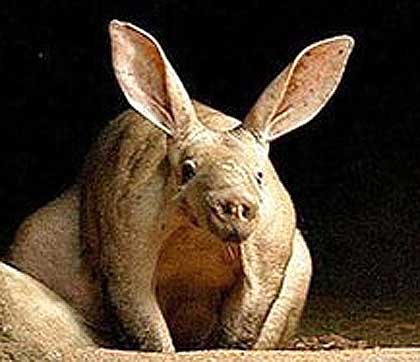 I can hear ants. You’re easy to hear

It Must be ALF

The one and only time I saw an Aardvark, in the flesh, was on an inky-dark and lonely winter night in the heart of the Great Karoo. Picked out in the cars’ headlights, as it crossed the road; the impression was of a flesh-colored elephant/pig…sporting a short, deformed trunk with big bunny ears! This still ranks (years later) as one of the most bizarre and disorientating experiences of my life! Driving through the moonless, icy night in my warm car surrounded by sleeping children, my mind was miles away. Partly hypnotized by the tail lights of M’s truck far ahead, this apparition shimmering in front of me was a moving, glowing mass in the empty road! Just when I thought I’d make millions from my story of alien abduction, I realized that I knew what I was seeing; but by then, the creature had disappeared into the dark…

My Alien – Only Smaller

A medium-sized, nocturnal mammal native to Africa, the aardvark is also known as an “antbear”, “anteater”, or “Cape anteater”. I don’t know how often participants in night-time game drives spot these elusive animals, but we have lived in aardvark territory for several years and have never seen one! The name comes from early Afrikaans, and means “earth pig” or “ground pig”, because of its burrowing habits. And amazingly, they are not related to South American anteaters or pigs but to elephants, elephant shrews, and hyraxes.

The aardvark does look vaguely pig-like with a stout body and arched back and the thick skin is thinly covered with coarse hairs. The thick-based tail adds to the general bulky look and the snout has a disc-ish look to the end (like a cartoon piggy), which is the nose. 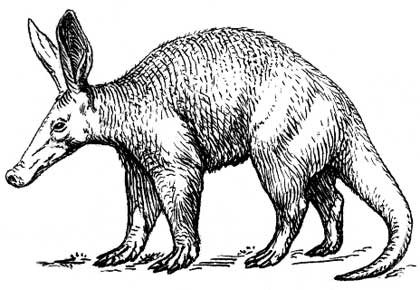 Photo’s are Hard to Get

Aardvarks Glow in the light?

Aardvarks are a pale yellowish-gray, which changes to a reddish-brown (or grey) when stained by the soil of the anthills and termite mounds where they feed. They can also get quite big with large specimens reaching a length of 2.2 meters (7ft 3in) including the tail and a weight up to 65 kilograms (140 lbs). Certainly, my one sighting had convinced me that they were at least as big as a Rhino… but as it turns out, not quite – maybe a tiny Rhino!

These unsociable creatures live in sub-Saharan Africa, in Savannah, bushveld, and desert; wherever the ants and termites that make up their diet are plentiful. These they catch and eat using their long, sticky tongue.

Fortunately, the lack of sightings has very little to do with a vulnerable conservation status – the populations are robust. Their shy, reclusive and solitary nature, coupled with the odd hours they keep, just make them very hard to spot on a regular basis!