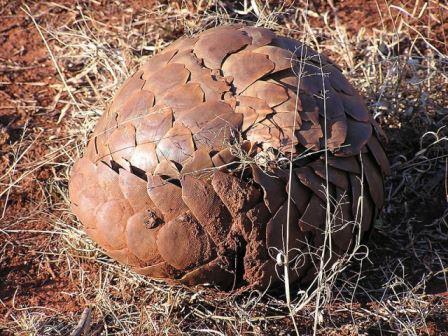 Say “hello” to another one of Africa’s bizarre, nocturnal, ant-eating creatures, otherwise known as a pangolin! Despite all visual evidence to the contrary, this armored carcass on four legs is mammalian.

The large, hardened keratin overlapping plate-like scales that cover its skin are an adaptation making this mammal look more than a little reptilian. And pangolin are African (and Asian) …

Pangolin come equipped with short legs and sharp claws, useful for digging up termite and ant mounds, as well as climbing. The really long tongue is perfect for lapping up the ants and other insects these nocturnal animals find with their acute sense of smell. After an exhausting night hunting grub, a pangolin spends most of the day curled up, sleeping.

Walking from Right to Left

On new-born pangolin, the keratin scales are soft but harden as the animal matures. These sharp, overlapping scales act as body armor. The pangolin can curl up into a ball and tuck its head under its tail when in danger. 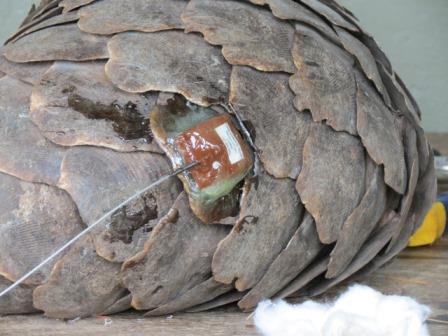 Sadly, all this armor isn’t enough when pitted against the pangolin’s worst enemy – man! Of the eight pangolin species worldwide, all have been given mystical properties according to traditional societies. Scales and other pangolin parts are used in traditional medicine and poaching is widespread.

Here in sub-Saharan Africa, similar problems are coupled with encroaching humanity and habitat loss. Conservationists scramble to assemble data on a rapidly diminishing pangolin population. One of the biggest threats has come from the very champions of conservation, the private game reserves. Electric fences, designed to keep animals in and poachers out, have proved the undoing for many pangolin. As the plated creatures negotiate the fences, they are caught up in the wire and electrocuted. 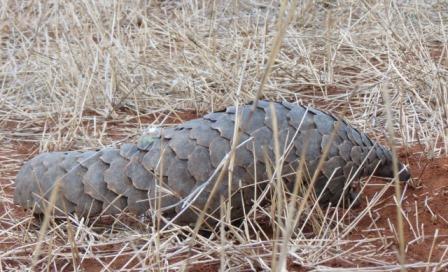 Get me Out of This Place

In an effort to better understand their movements, habits and territories, wildlife teams are fitting pangolin with tracking devices. These images from AWMC show how the radio device is attached to the tranquilized pangolin. Rudely awakened in the midst of a bustling veterinary team, this scaly customer dived down the nearest hole. Getting better pictures of his face was not an option 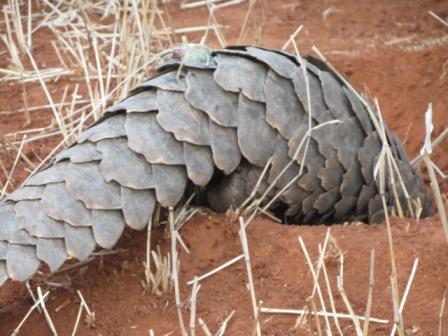 Pangolin Down the Hatch

Pangolin are shy loners only appearing after dark.  Their elusiveness is legendary; and although they occur from the Kruger Park to Zambia, not many bush dwellers have ever seen them.

In Zimbabwe, the Tikki Heywood Trust works to ensure the survival of endangered and threatened species like the pangolin.