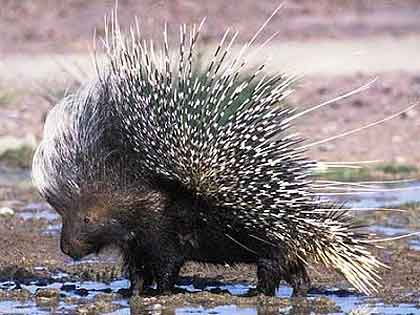 No One Would Dare Challenge His Claim

A Rare Palate With a Wild Appetite

I first saw a porcupine in the wild while traveling home, late one night. We were heading back to the bush after a weekend in the big smoke. A porcupine, spectacular and showy in its prickly, rattle-y splendor, casting caution to the wind, took off across the dark, empty highway, straight into the path of the Toyota 4 x 4!

M, through the skill and evasive action learned from years of dodging suicidal wildlife, (startled by the lights of a vehicle) was able to narrowly avoid a collision. The fortunate, spikey rodent careened off into the darkness on the other side of the road. I may not have seen a porcupine before but I had many good reasons to not be too fond of them and these are the reasons.

For years, living in the back-of-beyond – in South Africa – we had vegetable gardens; everyone did. All attempts at vegetable growing came to nothing unless the beds were protected by high pig-wire (chain-link) fences that extended well below the level of the ground. Porcupines weren’t the only challenge; there were duiker, steenbok, Cape hares, scrub hares, African Savannah hares, mice, rats and squirrels. Fair enough, if you’re going to be so unwise as to plant succulent treats in an unprotected place, then you take your chances. But what we never knew was that as tempting as fresh, organic vegetables are to a porcupine, their favorite food would prove to be rare, hybrid Bearded Iris rhizomes. 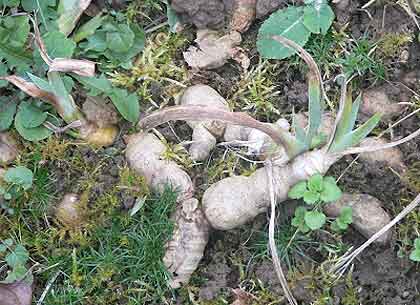 One of the first jobs when we moved onto our last farm, was dividing and re-planting the old Iris to beautify the beds around the driveway. The rhizomes had been obtained at great cost from a breeder; world renowned for the quality of their spectacular hybrids. This person had retired and many of these beautiful plants were not available anymore. Wanting to guarantee a supply of these treasures, the beds were carefully prepared and composted, as well as extended to take the new family in. 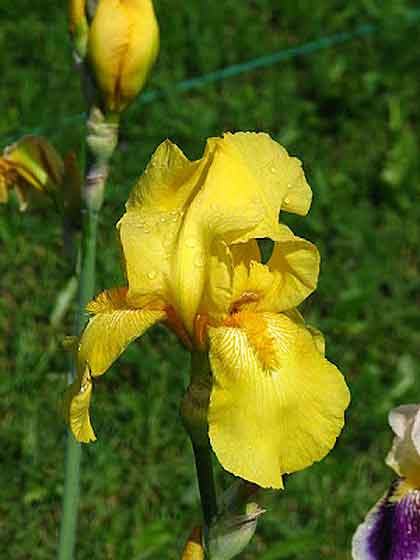 As the large beds were about twenty meters by fifty meters in size, around the driveway, the operation took some time. At last we finished and with the different colors marked with pegs and grouped, we waited to see the colorful results. Several weeks later, M noticed that the plants weren’t thriving. In fact they seemed to be dying back, no new shoots to be seen? Daily inspections showed disturbed soil and one morning, many of the planted rhizomes were found strewn over the ground. Strange, for nine years the bulbs had been in the same spot, blooming and increasing, unmolested. Now when hours of labor and money had gone into dividing, planting and fertilizing, something had decided these were the fillet steaks and pommes frites of the African Savannah. Transplanting was not an option but we managed to save a few and gave them to the local plant nursery. 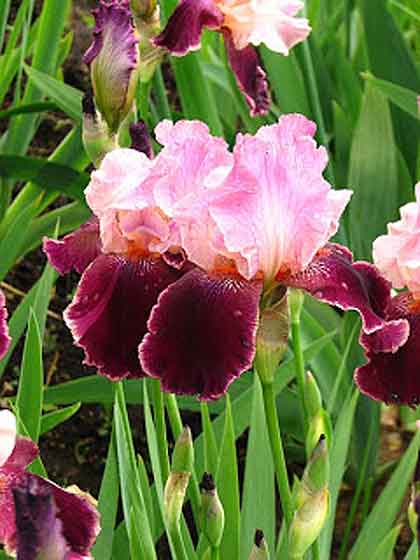 Eat Only the Best First

Every morning we went to inspect, every morning we were met with devastation worse than the day before. The ground was studied carefully for clues. What or who was behind this horticultural mystery, this nightmarish abscondence? Infuriatingly, the culprits were onto the whole color malarkey. The beds were destroyed one rare shade after another; first the palest of blues followed by the softest pinks then the tri-colors. Peach and yellow were next along with the whites. Of course the ordinary dark purples, which grew everywhere, were left ‘til last but eventually they too were taken, reluctantly.

M spent a lot of time looking for spoor in the heavily composted flower beds; there was no area where a clear footprint could be seen. Eventually, he decided that the only culprit could be a porcupine, although I think it was more of an educated guess. It wasn’t until most of the beds were destroyed that the offenders left a definite clue. I’d given up going-over the previous night’s results, finding the empty patches too depressing. M, on the other hand became more unbending, determined to catch the culprit, even conducting a stake-out.

Four in a Row… Cuddling?

The answer was presented one morning, about eight days after the devastation had begun. M came back with a handful of long porcupine quills. Searching the area, a huge den was found about a kilometer (over half a mile) into the bush. Only a really large colony would need that many burrows and that explained why the Iris rhizomes had disappeared so fast.

We never tried to replace the Irises. Convinced by the whole debacle, ground-cover was planted there – I think Periwinkle – something totally unpalatable to all the vegetarians we shared our game farm with. 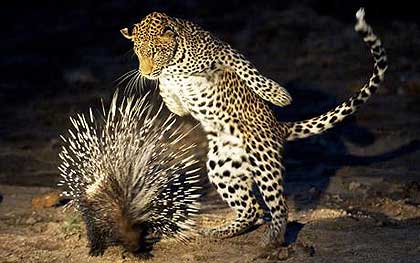 This image does not belong to me. It was sent to me by email and I don’t have a clue who owns it. So if anyone recognizes it as theirs’, please contact me to credit you or remove it if you prefer.

The South African Porcupine, (Cape Porcupine) inhabits much of Sub-Saharan Africa. It’s a nocturnal rodent and lives in dens, burrowed into alluvial soil, often near koppies (small rocky hills). These are the largest rodents (larger than the cane rat) in Southern Africa, weighing up to 30 kg (66 lb) and measuring over half a meter long. These colonies of dens can take on alarming proportions and can be hard to spot. One of our tractors, sent to plow a fallow land, was swallowed when a colony collapsed under the weight. We got used to having the porcupines around, although we rarely saw them. Bush walks would usually produce several quills and I’d use them on gifts to friends and family overseas. A small reward for those very rare Irises…