Voila! And A Book Is Born 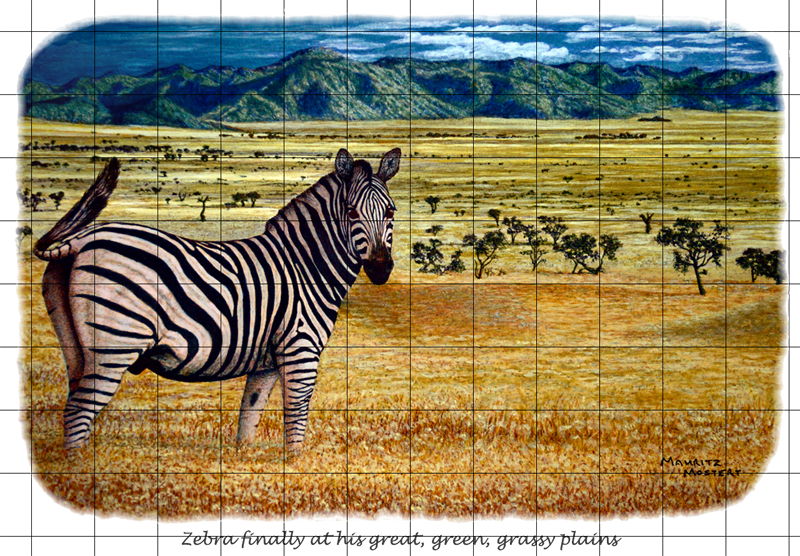 Zebra at the great plains with watermark image

Not any book mind you

Special? Well, I hope so! After all the effort that has gone into the preparation and setup, this little Zebra soft cover book and it’s mates have cost plenty in time and effort. We who created and promoted it have big hopes for this series coming up over the next year or so.

Ever heard of the classic Br’er Rabbit by Joel Chandler Harris? This was originally an African Folktale, or as some say a fable because the animals speak, as in humans. So, whether a fable or folktale, Br’er Rabbit was an anciant tale from North, Central and Southern Africa.

Now this book, ‘How The Zebra Got His Stripes’, is the first properly illustrated version since it was published in 2011. The journey of this new book has been thwart with many interruptions, some good like the Supercell I painted for a client and some bad, but by grace all has turned out fairly well. Here at the end we wanted the book to be published by this last week-end but Amazon and CreateSpace had other ideas. So we are sorry about that and as soon as they wake up we will publish and in the meantime we are going to Ingram publishers for maybe a better result. This has caused us to be a whole week late in our article publication, for which we are very sorry but it has never happened before. We’ll keep you posted.

Whatever happens, we hope to give it to you the day it is ready by whomsoever. In the meantime we have our ebooks and illustrated versions of those will be updated as soon as they come off the press.

Update:* This Illustrated Zebra will be available on Amazon mid next week. I will put a link here. The paperback book is now available on Amazon, but does not have a preview available yet. What you see here, is a lot more than Amazon gives, so here is that link as I said. If nothing else, it’s worth a look around.

As to the interpretation of the times, I chose to paint these precious stories in the style of the early African naturalist explorers. I used gouache paint to simulate the early pre-Victorian texture, but I have subsequently found oil on board in a mat look is easier to use and seems to give a better result. So for the next books they will be in oils and these will remain in gouache. Those will be in the Leopard and Jabu books as soon as they are ready then comes another twenty two in the series to follow. They have already been written, so it’s the art and the publishing that is needed. It’s slow going, but I need to apply accuracy and patients to both interpretation and execution in word and art.

Currently our written book has been used for the purpose of teaching English literature in selected American schools since 2015. It has also been paired with “Watership Down” by Richard Adams for teaching dialogue.

Here is the meager offering as well as I can do. Hope you all like it. 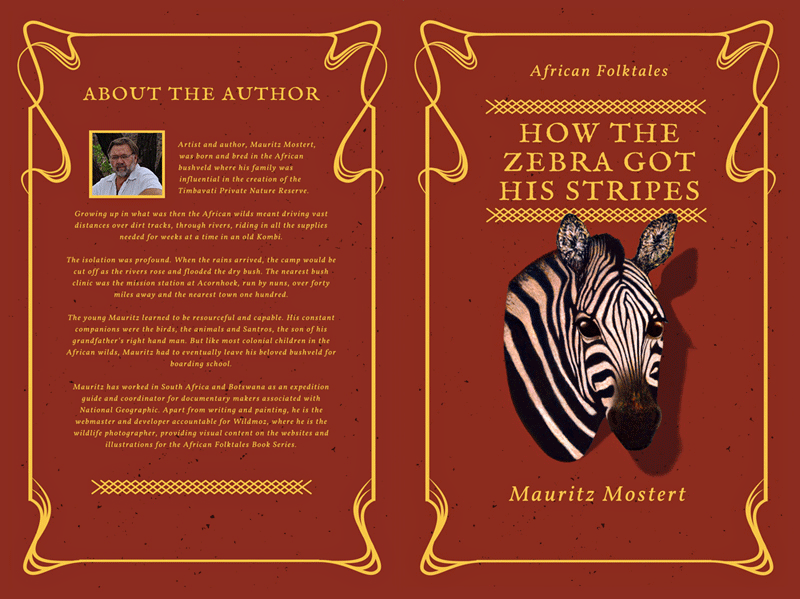 How The Zebra Got His Stripes

LONG, LONG AGO, somewhere in Africa, when all the people and animals were new… There was a great drought, the sun was hot and the water had dried from all but the deepest pans and waterholes.

ONE OF THE ANIMALS Zebra met at the very beginning of his long journey was Giraffe. To his amazement, he had never seen such a tall animal!

“Eish” he exclaimed, first seeing Giraffe’s huge feet, looking up, up, up, he met Giraffe’s friendly brown eyes looking down at him. 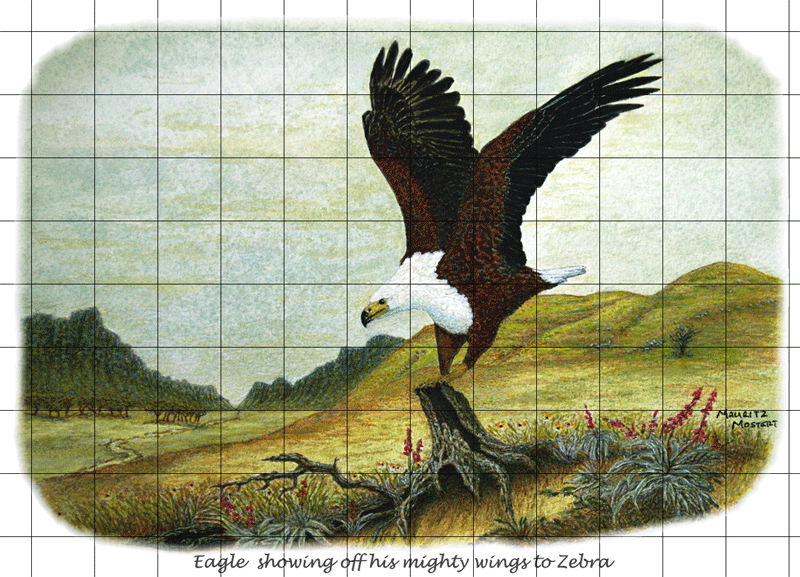 ZEBRA WANDERING DOWN the track again, came upon the strangest animal sitting on a large stump by the side of the path.

“Hello, what is your name and where are your front legs?”

FURTHER ON, while ambling down the path deep in thought, Zebra was suddenly brought up short by a snuffling, snorting kind of sound. Now there, right in front of him was the most extraordinary sight, an animal’s rump protruding from the ground. All of a sudden, with dirt and debris flying out in every direction, there emerged the oddest-looking creature… in Zebra’s opinion anyway. Cautiously, he stayed back while he stared at this bizarre vision, waiting for the dust to settle. 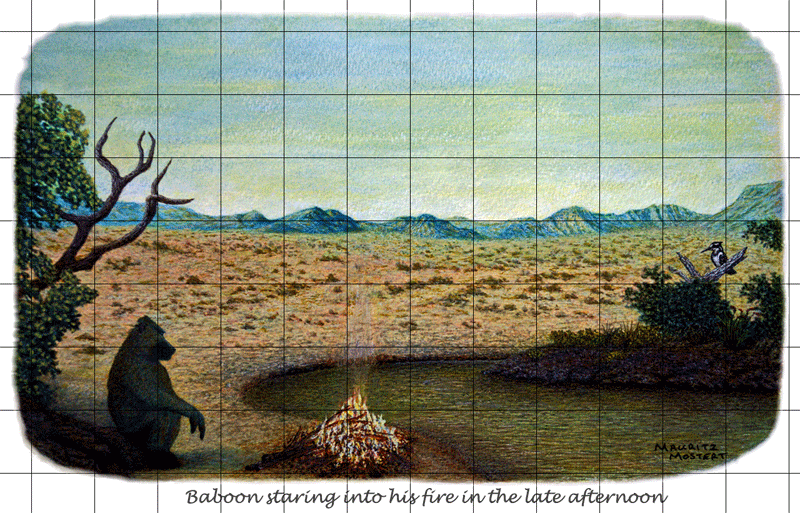 The big water with watermark

A FEW DAYS ON with many tsamma melons later, Zebra rather dusty and a little tired, arrived at the so-called baboon king’s big water for a much-needed drink.

So on goes Zebra, until he arrives at his destination.